I feel no shame in admitting that I love horror movies.  I don’t think that’s any secret to anyone who has ever read my reviews on this site or over at Through The Shattered Lens.  When I’m feeling so restless that I can’t sit still or focus, all you have to do is give me a horror film (especially if it’s one that I’ve never never seen before) and I’ll be quiet for at least 90 minutes.

That’s why I’m always on the look out for horror movies that I haven’t seen before.  If it’s a horror movie, I’ll watch it regardless of obscurity, age, or critical disdain.  At its best, this habit has led to me discovering neglected cinematic gems like Sole Survivor.

And it’s worst, it’s led me to me sitting through films like 1980’s The Hearse. 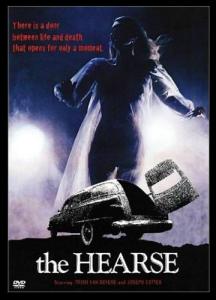 The Hearse is one of those public domain film that turns up in every other Mill Creek Box Set and it tells a very familiar story.  A recently divorced woman named Jane (played by Tish Van Devere, who was married to George C. Scott at the time) leaves the big city to seek peace and solace in a creepy small town that’s full of rednecks who stare at her with a combination of lust and total disdain.  Jane moves into a house that once belonged to her aunt and, pretty soon, she’s hearing strange sounds and having nightmares.  On some nights, she sees a hearse (which, earlier, had attempted to run her off of the road) pull up in front of her house.

Jane attempts to tell the local sheirff about the strange happenings at her house but he responds by suggesting that maybe she should move.  The local townspeople respond to her concerns by telling her that her aunt made a pact with Satan.  The local priest comes by and tells Jane that the necklace her aunt gave her is a symbol of Satan.

None of this really makes much of an impression on Jane, mostly because she’s busy dating this creepy guy named Tom.  Tom rarely ever shows any emotion and, on those rare occasions that he does smile, his face looks like a leering skull.

Again, Jane doesn’t seem to notice any of this…

Obviously, horror requires a certain suspension of disbelief but, seriously, it’s hard not to watch The Hearse and feel as if the scariest thing about the movie is the idea that anyone could be as stupid as Jane.

That said, The Hearse isn’t a total waste of time.  The nightmare sequence is genuinely effective and the film itself features a few creepy visuals but, then again, there’s no way the sight of a hearse pulling up in front of a house in the middle of the night couldn’t be creepy.  Trish Van Devere does okay as Jane, though it’s somewhat odd that all the teenage boys in the town keeps talking about how hot and sexy she apparently is when she looks like she’s about 50 in this film.  (Then again, she also appears to be the only woman in town…)  If, like me, you’re into film history, you’ll enjoy this film as a relic of the past, an example of what horror movies were like in a less ironic age.