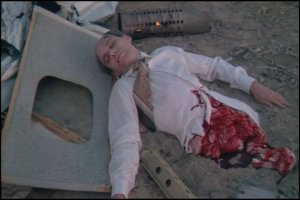 For my first May review here at Horror Critic, I want to take this oppurtunity to tell you about an ujustly obscure horror film for 1983, Sole Survivor.

I found this film on DVD at Half-Price Books where it was being sold for a dollar in the clearance section.  If not for the fact that I can’t resist a bargain, I would never have heard of this movie.  Which is a shame because, taken on its own low-budget terms, Sole Survivoris actually a pretty effective horror film.

Written and directed by Thom Eberhardt, Sole Survivor has a plot that should be familiar with anyone who has ever seen any of the Final Destination films.  Denise (played by an actress named Anita Skinner) is a neurotic commercial producer who, as the film opens, is the sole survivor of a horrendous airplane crash.  (When we first see Denise, she’s still sitting in her seat, surrounded by the remains of her fellow passengers.)  Against the advice of just about everyone, Denise insists on dealing with the trauma of the accident by trying to return to her normal life.  This is complicated, however, by the fact that she’s still having dreams about the plane crash.  Everywhere she looks, she sees mysterious and menacing strangers watching her.  And, on top of everything else, she is now being stalked by a mentally unstable former actress who claims to be having nightmarish visions of Denise’s future.  Is Denise suffering from survivor’s guilt (as her doctor boyfriend insists) or is she instead being pursued by Death?  If you’ve ever seen a horror film, you can probably guess the answer.

As I mentioned previously, its easy to compare Sole Survivor with the Final Destination films.  However, a more appropriate comparison would be to the 1962 black-and-white classic Carnival of Souls.  Whereas the Final Destination films are largely about coming up with ludicrously convoluted ways for Death to get what he or she wants, Sole Survivor (like Carnival of Souls)  is less concerned with how Death gets the job done and more concerned with building and maintaining a growing sense of dread and hopelessness.  For the most part, director Eberhardt disdains easy shock effects in order to concentrate on building up a palpable atmosphere of doom.  As a result, the film can occasionally seem to be a little slow but it stays with you even after the final credit.

Also, much like Carnival of Souls, Sole Survivor features an excellent lead performance from an actress who, more or less, disappeared from movie screens after the film’s release.  Carnival had Candace Hilligoss.  Sole Survivor has Anita Skinner.  Skinner gives an excellent lead performance, always remaining a sympathetic.  According to an interview with the film’s producers, Skinner was uncomfortable with the more excessive side of Hollywood and retired from acting shortly after making Sole Survivor. 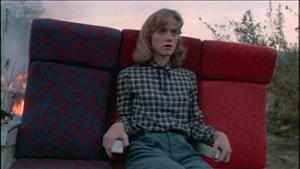 Sole Survivor was released on DVD by Code Red, so now people like me can appreciate this neglected movie.  The transfer looks great.  Unfortunately, the DVD is pretty thin when it comes to extras.  Neither Eberhadt nor Skinner are interviewed nor do they contribute to the film’s commentary track.  Instead, we have to make due with the film’s producers.  In general, producers usually provide the worst DVD commentary tracks with typical insights running along the lines of “We had the same lawyer” and “So, after that, we brought in another screenwriter.”  The producers of Sole Survivor aren’t quite that bad but their commentary is still definitely lacking in insight.

But that’s a minor complaint.  In the end, what matters is the movie and not the commentary track.  And as a movie, Sole Survivor is a an overlooked classic of the horror genre. 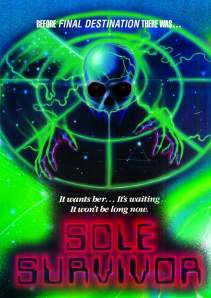