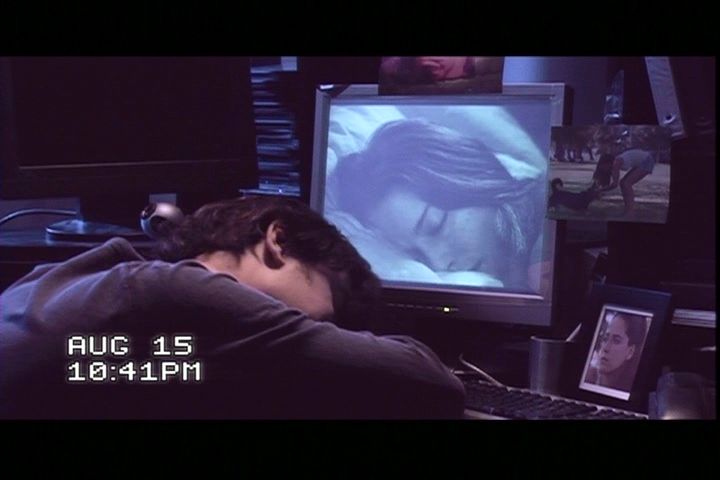 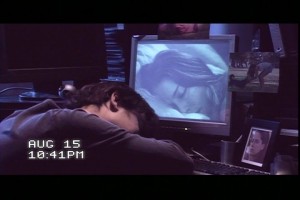 I recently watched the 2007 horror film Alone With Her and I have to say that I’m surprised that this film isn’t better known.  It’s probably one of the better horror films that I’ve seen recently.  I say this despite the fact that it’s a “found footage” horror film, that is the entire film is presented as being told through the lenses of various spy cameras.  I can count on two hands the number of “found footage” films that have actually worked for me.  As of right now, Alone With Her is sitting on the tip of my right pinkie finger.

Alone With Her opens with a disturbing montage, as Doug (Colin Hanks) wanders around the streets of the city, following every woman he sees and secretly filming them with a hidden camera.  The fact that this montage plays out at such an unhurried and unmelodramatic pace makes it all the more disturbing as Doug does things like standing behind a woman so he can film up her skirt or then pretending to shop solely so he can secretly get some leering footage of her cleavage.  By the end of this montage, I was already thoroughly creeped out and debating whether I would ever feel safe wearing a skirt in public again.  (Ultimately, I decided that I would continue to wear skirts but that, from now on, I’m going to pepper spray any man who stands less than a foot behind me.)

Eventually, Doug spots a woman named Amy (Ana Claudia Telancon) at a park and he follows her back to her home.  Over the next few days, he obsessively films her as she unknowingly goes about her life until, finally, he breaks into her apartment and sets up numerous spy cameras.  Now free to observe every aspect of her life, Doug  arranges to meet the emotionally fragile Amy and, using the knowledge that he’s gained from spying on her, he strikes up a friendship.  However, Amy’s best friend (played by Jordana Spiro) is suspicous of Doug and her suspicions lead to the film’s shockingly violent climax.

I didn’t have high expectations for Alone With Her and, even as I write this review, I have to admit that I’m still surprised at just how effective this film turned out to be.  For a film that doesn’t have much gore or any huge “shock” scenes, Alone With Her is an effectively creepy horror film that sticks with you long after the final frame.

A lot of the credit for the film’s success has to go to the cast.  Talancon is likable as Amy and Jordana Spiro brings unexpected nuance to the role of the stereotypically outspoken best friend.  Anyone who saw the sixth season of Dexter already knows that Colin Hanks can play a psycho but they still might not be prepared for just how downright creepy Hanks is in this film.  The film makes good use of Hanks’s neurotic persona and Hanks does a good job of revealing the empty core that’s hiding behind Doug’s outward affability.  As played by Colin Hanks, Doug is the everyman-as-psycho.

However, the real star of the film is director Eric Nicholas.  I’m usually not a big fan of horror films that claim to have been assembled from  “found footage.”  There are a few noticeable expections (like Ruggero Deodato’s Cannibal Holocaust, The Last Exorcism, Apollo 18, and Paranormal Activity 3) but, for the most part, these films never seem to be able to escape from the gimmicky feel of the concept.  (Add to that, they often fail to convince us that anyone would actually keep filming even while their being pursued by a masked murderer or whatever threat the narrative may supply.)  However, Nicholas manages to take the limitations of the found footage genre and transform them into strengths.  It helps that this film is about voyeurism and, by presenting what we’re seein as being “found footage,” Nicholas creates a true sense of unease.  By the end of the film, I found myself nervously glancing around my bedroom and wondering if there was anyone watching me.  Nicholas creates and sustains such an atmosphere of paranoia that the film’s familiar story takes on a surprising power.

As I stated previously, Alone With Her was a real surprise.  It’s a disturbing and all too plausible horror movie that stays with you. 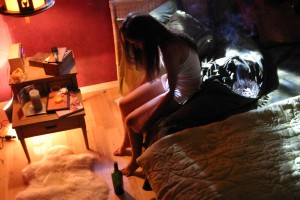