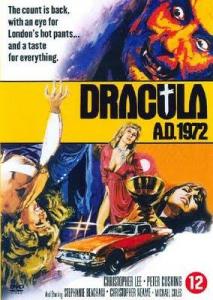 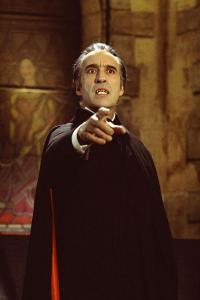 I don’t know about you but I love the old school Hammer horror films from the 60s and 70s.  These are the films where iconic actors like Christopher Lee and Peter Cushing played characters like Dracula and Baron Von Frankenstein.  At the time they were released, they were considered to be quite risque but, seen today, they’re rather tame but still entertaining.  That’s a huge part of their charm.  This month, I want to take a look at one of the later Hammer films, 1972’s Dracula A.D. 1972.

The film opens in 1872 with a genuinely exciting fight on a runaway carriage that ends with the death of both Count Dracula (Christopher Lee) and his nemesis, Prof. Van Helsing (Peter Cushing).  However, as Van Helsing is buried, we see one of Dracula’s disciples (played by Christopher Neame, who had an appealingly off-kilter smile) burying Dracula’s ashes nearby.  The camera pans up to the clear Victorian sky and, in a sudden and genuinely effective jump cut, we suddenly see an airplane screeching across the sky.

Well, it’s all pretty much downhill from there.  Suddenly, we discover that a hundred years have passed and we are now in “swinging” London.  The city is full of red tourist buses, hippies wearing love beads, and upright policemen who always appear to be on the verge of saying, “What’s all this, then?”  We are introduced to a group of hippies that are led by a creepy guy named Johnny Alculard (also played — quite well, actually — by Christopher Neame). One of those hippies (Stephanie Beacham) just happens to be the great-great-granddaughter of Prof. Van Helsing.  Apparently, she’s not really big on the family history because she doesn’t notice that Alculard spells Dracula backwards.  Then again, her father (played by Peter Cushing, of course) doesn’t either until he actually writes the name down a few times on a piece of a paper.

Anyway, the film meanders about a bit until finally, Alculard convinces all of his hippie friends to come take part in a black mass.  “Sure, why not?” everyone replies.  Well, I don’t have to tell you how things can sometimes get out-of-hand at black mass.  In this case, Dracula comes back to life, kills a young Caroline Munro, and eventually turns Johnny into a vampire before then setting his sights on the modern-day Van Helsings.

Dracula A.D. 1972 was Hammer’s attempt to breathe some new life into one of its oldest franchises and, as usually happens with a reboot, its critical and (especially) commercial failure ended up helping to end the series.  Among even the most devoted and forgiving of Hammer fans, Dracula A.D. 1972 has a terrible reputation.  Christopher Lee is on record as regarding it as his least favorite Dracula film.  And the film definitely has some serious flaws.  Once you get past the relatively exciting pre-credits sequence, the movie seriously drags.  There’s a hippie party sequence that, honest to God, seems to last for about 5 hours.  As for the hippies themselves, they are some of the least convincing middle-aged hippies in the history of fake hippies.  You find yourself eagerly awaiting their demise, especially the awkward-looking one who — for some reason — is always dressed like a monk.  (Those crazy hippies!)  But yet…nothing happens.  All the fake hippies simply vanish from the film.  Yet, they’re so annoying in just a limited amount of screen time that the viewer is left demanding blood.  Add to that, just how difficult is it to notice that Alculard is Dracula spelled backwards?  I mean, seriously…

To a large extent, the charm of the old school Hammer films comes from the fact that they’re essentially very naughty but never truly decadent.  At their heart, they were always very old-fashioned and actually quite conservative.  The Hammer films – erudite yet campy, risqué yet repressed — mirror the view that many of my fellow Americans have of the English.  For some reason, however, that Hammer naughtiness only works when there’s the sound of hooves on cobblestone streets and when the screen is populated by actors in three-piece suits and actresses spilling out of corsets.  Dracula A.D. 1972 did away with the support of the corset and as a result, the film is revealed as a formless mess with all the flab revealed to the world.

Still, the film isn’t quite as bad as you may have heard.  First off, the film — with its middle-aged hippies — has a lot of camp appeal.  It’s the type of film that, once its over, you’re convinced that the term “groovy” was uttered in every other scene even though it was not.  As with even the worst Hammer films, the film features a handful of striking images and Christopher Neame is surprisingly charismatic as Alculard.

As with the majority of the Hammer Dracula films, the film is enjoyable if just to watch the chemistry between Christopher Lee and Peter Cushing.  Both of these actors — so very different in image but also so very stereotypically English — obviously loved acting opposite of each other and whenever you see them on-screen together, it’s difficult not to enjoy watching as each one tried to top the other with a smoldering glare or a melodramatic line reading.  As actors, they brought out the best in each other, even when they were doing it in a film like Dracula A.D. 1972.  In this film, Cushing is like the father you always you wished you had — the stern but loving one who protected you from all the world’s monsters (both real and cinematic).

As for Lee, he’s only in six or seven scenes and he has even fewer lines but, since you spend the entire film wondering where he is, he actually dominates the entire movie.  Lee apparently was quite contemptuous of the later Hammer Dracula films and, oddly enough, that obvious contempt is probably why, of all the Draculas there have been over the years, Lee’s version is the only one who was and is actually scary.  F0rget all of that tortured soul and reluctant bloodsucker crap.  Christopher Lee’s Dracula is obviously pissed off from the minute he first appears on-screen, the embodiment of pure destructive evil.  And, for whatever odd reason, the purity of his evil brings a sexual jolt to his interpretation of Dracula that those little Twilight vampires can only dream about.  Even in a lesser films like Dracula A.D. 1972, Christopher Lee kicks some serious ass.

So, in conclusion, I really can’t call Dracula A.D. 1972 a good film nor can I really suggest that you should track down a copy of the DVD.  I mean, I love this stuff and I still frequently found my mind wandering whenever Cushing or Lee wasn’t on-screen.  However, it’s not a terrible movie to watch if you want some old school Hammer thrills.