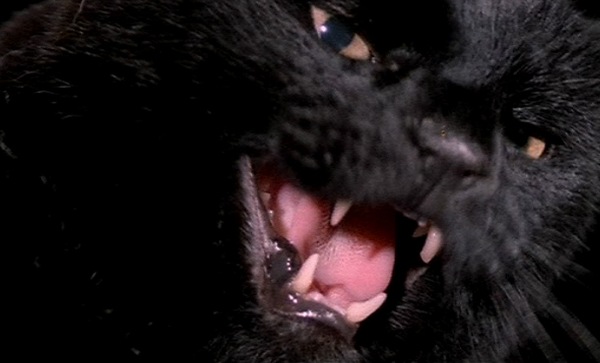 For my first horror review of October, I want to tell you about a movie that was directed by one of my favorite Italian filmmakers, Lucio Fulci.  That movie is the unjustly neglected Gato nero, or the Black Cat.

In The Black Cat (loosely — and I do mean loosely — based on Edgar Allan Poe’s short story), the great David Warbeck plays a detective who is  sent to a small English village to investigate a series of mysterious deaths.  Corpses are turning up covered in scratches.  A man crashes his car after a black cat suddenly shows up in the passenger’s seat.  A young couple is found dead in a locked-up boathouse.  Evidence suggests that the killer entered through a small air vent.  No human could fit through that vent but…how about a cat?  Warbeck enlists the aid of a visiting American photographer (Mimsy Farmer) to investigate the crimes and he soon comes across a half-crazed medium (Patrick Magee) who just happens to own an adorable, if ill-tempered, black cat…

Fulci is well-known for directing such seminal (and gory) horror films as Zombi 2 and The Beyond trilogy.  The Black Cat was made during the same period of time as his more infamous films but it has never received as much attention.  Perhaps that’s because The Black Cat almost doesn’t feel like a Fulci film.  The gore is played down, the plot is coherent and (for a Fulci film) surprisingly linear, and the film even has a playful sense of humor to it.  Indeed, this often feels more like a minor, if entertaining, Hammer film than a Fulci film.  However, visually, this film is clearly the work of Lucio Fulci.  With his constantly prowling camera following isolated characters through dark streets and passageways, Fulci manages to make a small English village feel just as menacing as the dying Caribbean island from Zombi 2.  For all the attention given to Fulci as a “master of gore,” the true strength of his best films came from Fulci’s ability to create a palpable atmosphere of dread.  Fulci used gore as a tool but not as a crutch and if The Black Cat is a minor Fulci film, it’s still a film that proves that he was a far better director than even many of his fans give him credit for.

The Black Cat is surprisingly well-acted by a cast that’s made up of an appealing  combination of Fulci regulars and English B-movie veterans.  I read an old interview in which Warbeck complained that he felt his performance here was “boring,” but actually he was the perfect lead for this type of film, likable and with enough of a sense of humor to keep you watching.  Al Cliver may not be a household name but he and his blonde mustache seemed to show up in just about every movie Fulci made and he shows up here as well.  This time, he’s playing a local English constable and he’s no more believable here than he was playing a scientist in The Beyond or a boat captain in Zombi 2.  Still, any true Fulci fan will always be happy to see Cliver show up in a Fulci film because — much like familiar but bland wall paper — he lets us know that we’re home.  Patrick Magee is probably best known for his over-the-top performance as Mr. Alexander in A Clockwork Orange.  Magee goes just as much over-the-top here but, just as in A Clockwork Orange, Magee’s performance fits in perfectly with the film he’s appearing in.  Much as Stanley Kubrick contrasted Magee’s performance with Malcolm McDowell’s more subtle work, Fulci contrasts Magee’s theatrical approach with the more relaxed performances of Warbeck and Farmer.  Did I just compare Lucio Fulci to Stanley Kubrick?  Yes, I did and I stand by it.

However, the real star of this film is the black cat.  Trust me, this black cat (or black cats as I imagine several were used) is both adorable and blood-thirsty.  I still say that my cat Doc is the cutest black cat in the world but this film’s murderous feline comes in a very close second. 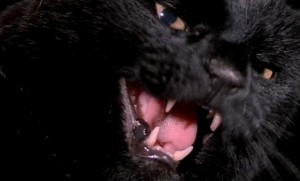