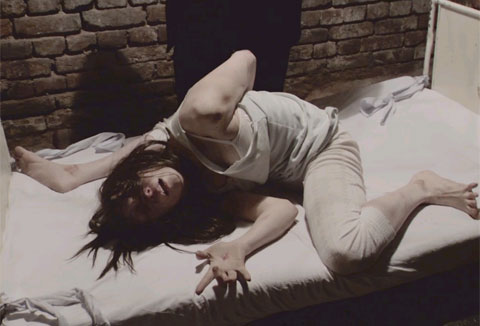 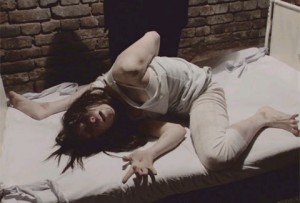 As a film reviewer, I usually try to introduce my readers to good films that they might otherwise miss.  However, sometimes, you see a film that’s so bad, bland, and/or boring that you simply have to speak up to prevent anyone else from wasting their time watching it.

The Devil Inside is one such film.

The Devil Inside is yet another horror film that’s disguised as a “found footage” documentary.  A camera crew follows Isabella Rossi (Fernanda Andrade) as she wanders around Rome and investigates the rite of exorcism.  It seems that Isabella’s mom, Maria, committed a triple homicide 20 years previously and Isabella thinks that Maria’s possessed by a demon.  Isabella recruits two priests to perform an exorcism on her mother and — well, the rest of the movie is pretty much a remake of every other horror film that’s been released over the past 20 years.  The only surprise comes at the end of the film when a title card appears, inviting the viewers to visit a web site about the Rossi murders so that they can learn more about the “ongoing investigation.”  If there was ever a point, during the film, when you actually believed that the story being told was true, that might be an effective ending.  However, since the whole films feels false, that title card just feels insulting.

The Devil Inside was one of the first movies to be released in 2012 and, 10 months later, it remains one of the worst.  The performances aren’t particularly memorable, the scares are nearly non-existent, and there’s not a thing to be seen in this film that one can’t see in a better horror film.  Whereas films like The Last Exorcism, Apollo 18, and the third Paranormal Activity film actually managed to find a new wrinkles to the whole “found footage” genre, The Devil Inside seems to be content to be mediocre, boring, and, worst of all, boring.  Perhaps that’s why when I think about The Devil Inside, my immediate response is, “No more!”

No more horror films disguised as documentaries.  No more artfully awkward scenes where characters say things like, “Is the camera on?” and “Are you getting this?”  Listen, aspiring horror filmmakers — the gimmick no longer works!  We know that you didn’t just happen to find this footage sitting in some warehouse somewhere.  Don’t end your film by telling us that we should visit some equally fake web site so that we can see more “proof” that what we’ve just seen is real.  Just stop it.  It was a good gimmick while it lasted but it’s no longer effective.  It’s time to discover some new trick with which to fool your audience.

In short, it’s time for horror filmmakers to stop expecting us to be content with stuff like The Devil Inside.