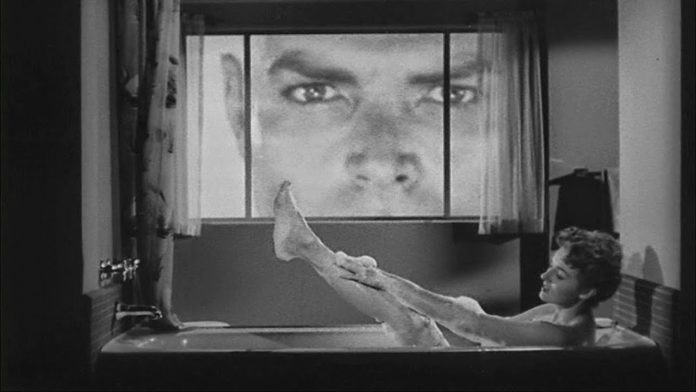 First released in 1957 and beloved by B-movie lovers ever since, The Amazing Colossal Man tells the story of Lt Col. Glenn Manning (Glenn Langan).

In Nevada to observe the testing of America’s first plutonium bomb, Glenn panics when he sees that a small commercial plane has crashed in the test area. Glenn runs out to rescue the pilot and, not surprisingly, he ends up getting caught up in the bomb’s nuclear blast. Though he survives the initial explosion, he’s suffered severe burns and he’s not expected to live.

However, survive he does! Glenn Manning may now be totally bald but he still recovers from the burns. The only problem is that Glenn is growing now. He keeps getting bigger and bigger until eventually …. he’s colossal!

Unfortunately, becoming a giant doesn’t do much for Glenn’s overall mood. The film is rather unclear on what Glenn was like before he got dosed with radiation but afterwards, he’s kind of a jerk. He’s bitter about being so big. He’s upset that he has to live in a tent out in the middle of the desert. He resents being told that everything’s going to be okay. Worst of all, he’s reduced to wearing a really giant diaper which …. well, I don’t even what to think about it!

Eventually, Glenn gets so annoyed that he goes on a rampage, heading for Las Vegas! Realizing that America’s greatest city is in danger of being destroyed, the military goes into action. While Glenn’s former friends try to inject him with a giant hypodermic needle (and seriously, the scene where a group of them charge at him with the needle simply has to be seen to be believed), the military tries to destroy him. As for Glenn, he just wants to visit the Boulder Dam….

Anyway, The Amazing Colossal Man is pretty silly but it’s also undeniably enjoyable. It was directed by Bert I. Gordon (who was nicknamed Mr. Big because of the number of films that he made about giants) and there’s something undeniably charming about the sight of the giant Glenn towering over Vegas. Admittedly, if you’re looking for a film that realistically and sensitively explores what it would be like to be a mad giant, this isn’t the film for you. However, if you’re just looking for a short and silly movie with a giant bald man ripping up downtown Las Vegas, The Amazing Colossal Man is just what you need!