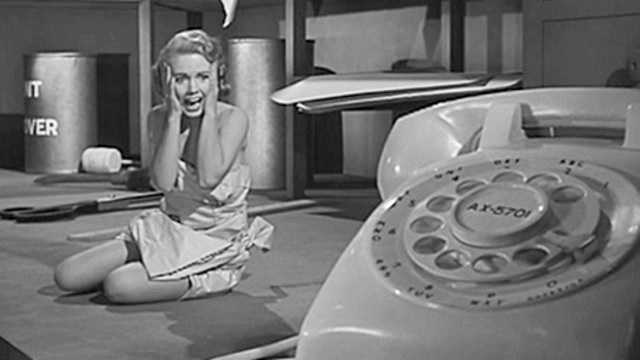 At the start of the 1958 film, Attack of the Puppet People, Sally Reynolds (June Kenney) is looking for a job.  Fortunately, Dolls, Inc. is hiring!  Dolls, Inc. is owned by Prof. Franz (John Hoyt), who is the world’s greatest dollmaker.  In fact, he’s got an entire display case full of very lifelike dolls.  Why, the dolls are so authentic that it almost seems as if they could be alive.  Is it possible that Franz had been shrinking people and then sticking them in his display case?

It’s not only possible but it’s also exactly what Franz has been doing.

Soon, Sally and her boyfriend, Bob (John Agar), have been shrunk down to dollsize and are living with the other dolls in the display case.  It turns out that Prof. Franz’s motives aren’t really malicious.  He just tends to get lonely and he’s decided that they best way to keep people around is to shrink them and then imprison them.  Fortunately, getting shrunk doesn’t seem to lead to any health complications or anything like that.  It just means that you’re now very small and vulnerable to dogs and cats.

Franz even allows the dolls to come out of the display case at night.  Much like the toys from Toy Story, the Doll People throw a party every night and pretend to just be inanimate objects whenever anyone steps into the store.  That said, the puppet people don’t necessarily want to spend the rest of their lives on display.  Can they figure out how to escape from the store and how to reverse the shrinking process?

It’s a pretty silly film but then again, what else would you expect from something called Attack of the Puppet People?  There are a few amusing scenes where the puppet people have to deal with maneuvering around and dealing with giant furniture and, at one point, a really big door knob.  And, of course, there’s the inevitable scene in which a curious dog spots two of the puppet people trying to make their escape.  It’s a 50 B-movie, dumb but undeniably fun.  John Hoyt appears to be having a lot of fun as the doll-loving mad scientist and John Agar is his usual stolid but oddly likable self.

Attack of the Puppet People was directed by Bert I. Gordon, who also did The Amazing Colossal Man and War of the Colossal Beast.  (At one point, Bob and Sally got to a drive-in that’s show The Amazing Colossal Man and Gordon shares a few minutes of his previous film.)  Gordon specialized in films about giant lizards, giant insects, giant ants and sometimes even giant people.  In fact, his nickname was “Mr. Big,” both because of his initials and the subject matter of his films.  Attack of the Puppet People is a unique Gordon film in that it deals with shrinking instead of growing.  It’s also one of his more entertaining films.  Bert I. Gordon, incidentally, is still with us.  He turned 100 years old on September 24th. 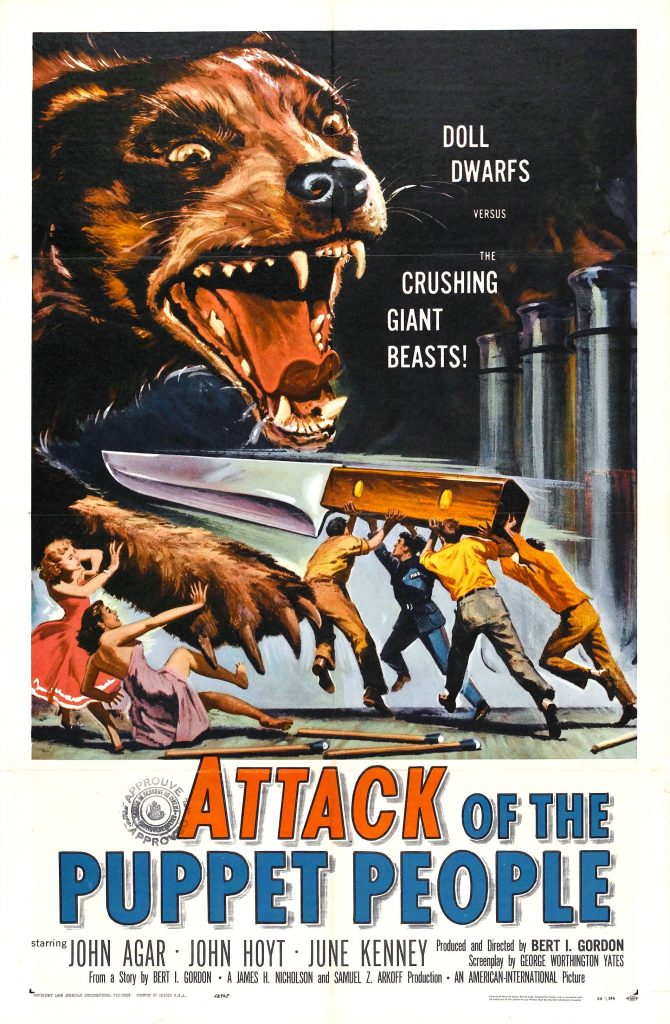