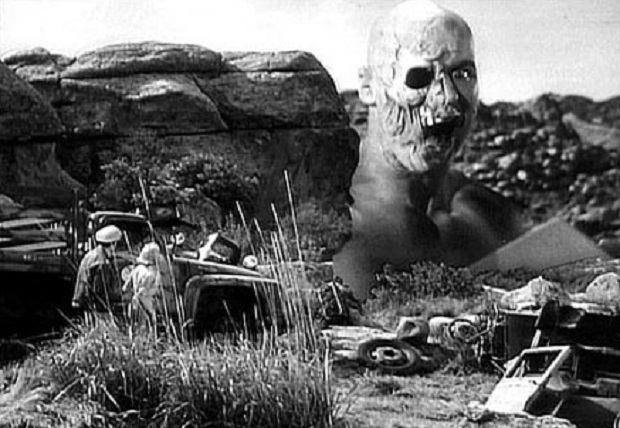 When we last saw Lt. Col. Glenn Manning in 1957’s The Amazing Colossal Man, he had grown to become a giant as the result of getting caught up in a nuclear blast. He had also gone totally mad and, after attempting to destroy America’s greatest city (Las Vegas, if you had to ask), he promptly fell off the Boulder Dam. Everyone assumed he was dead.

1958’s War of the Colossal Beast (which came out a year after The Amazing Colossal Man) opens with the discovery that Glenn is still alive and he’s still wandering around in the desert. Of course, as the title suggests, he’s no longer a man. Now, he’s a crazed beast! Not only is he missing an eye and several teeth but he can no longer speak in intelligible words. Whatever bit of mind he had left when he went over the side of Boulder Dam, he lost it all when he landed.

That’s not to say that the beast that was once Glenn doesn’t have memories. In fact, a good deal of this film’s 69 minute run time is made up of flashbacks to The Amazing Colossal Man. It’s just that Glenn can’t figure out what those flashbacks mean. Perhaps it’s because Glenn is now played by an actor named Dean Parkin while the flashbacks all feature a totally different actor in the role.

Anyway, Glenn is once again captured by the army and once again, he manages to escape. This time, Glenn leaves Vegas alone and instead attacks Los Angeles and Hollywood. Spare the film industry, Glenn! It’s up to the army and Glenn’s sister to once again try to convince Glenn to stop ripping the city apart. Of course, they could just try to convince him to fall off another dam….

War of the Colossal Beast will be best appreciated by people who have seen the first film and who are looking for some sort of closure to Glenn’s tragic growth spurt. The main lesson of these films is that you should never try to rescue anyone in the desert. If Glenn hadn’t tried to save that pilot who crashed in the nuclear testing site, Vegas and Hollywood would never have been destroyed. It’s something to think about.