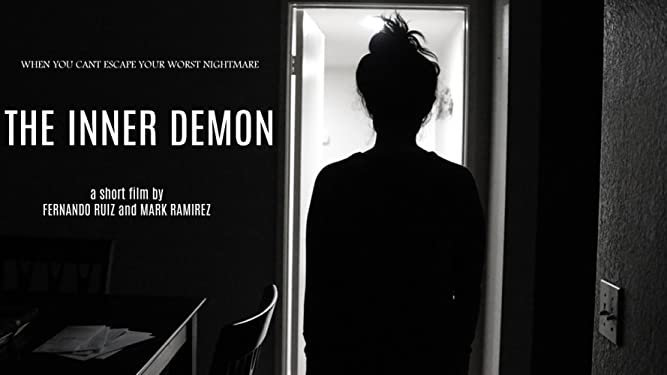 Welcome to the wonderful month of October!

So, let’s just clear something up right away. 2020 has been a scary year. There’s no reason to pretend like it hasn’t been. And unfortunately, this year, it’s not just going to be ghosts, vampires, and werewolves making people nervous throughout the month of October.

But you know what? I love this month. I love Halloween. I love horror movies. I assume you feel the same way, seeing as how your reading a site called Horror Critic. This October, I’m going to try to post a review a day. I’m going to celebrate this holiday because this is my favorite time of year. I hope you’ll join me.

One way you can join me is by watching a film called The Inner Demon. It’s a short, 25-minute film that can currently be viewed on Prime. It tells the story of The Girl (played by Andrea Pazmino). The Girl, who is never given a name in the film, has just moved into a new apartment. It seems like a nice enough place but sometimes, The Girl can hear strange sounds, as if she’s not truly alone in the apartment. We watch as she tries to go about her day. She makes a phone call to a friend. She talks about the apartment. There are hints of some of dark tragedy in the Girl’s life, a tragedy that might be related to what she’s hearing. Through it all, we sense that someone or something is watching the Girl. What is it? Watch the film to find out.

Filmed in glorious black-and-white, The Inner Demon is an effectively creepy short film. Though you’ll probably be able to guess a lot of about the film’s plot just from the title, the film establishes an ominous atmosphere early on and it grabs your attention. Directors Mark Ramirez and Fernando Ruiz do a very good job of making that simple apartment look very menacing. When their camera rushes through the apartment, it’s hard not to feel as if the world itself is spinning out of control.

The Inner Demon is a nice and spooky way to start off October. It’s available on Prime!