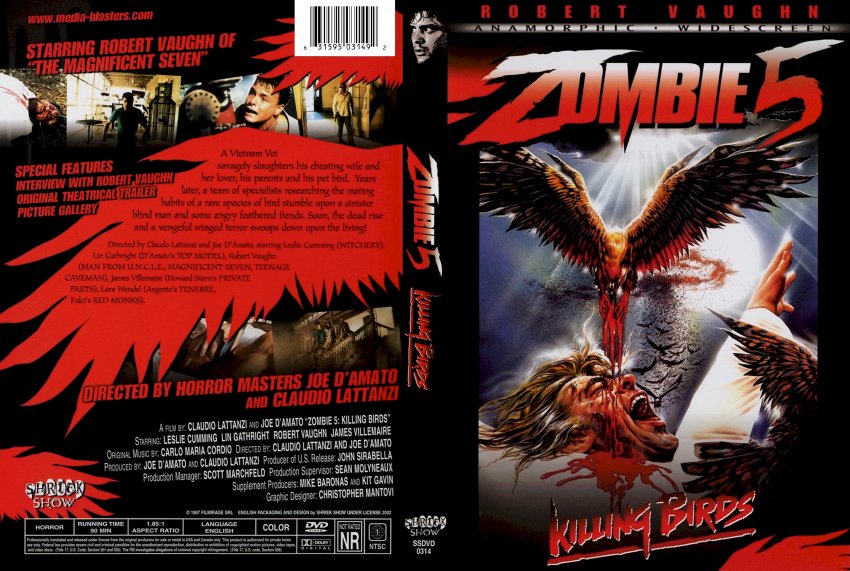 Thanks to the wonderful people at Anchor Bay, I recently watched Zombie 5: Killing Birds, one of the last of the old school Italian horror films.

Admittedly, when I first hit play on the DVD player, I was expecting the worst.  Of all the various official and unofficial sequels to Lucio Fulci’s masterpiece Zombi 2 (which, of course, was itself an unofficial prequel to Dawn of the Dead), Zombie 5: Killing Birds has the worst reputation.  While most Italian horror fans seem to agree that Zombie 4 is enjoyable on its own stupid terms and even Zombi 3 has a few brave defenders, its hard to find anyone willing to defend Killing Birds.  The general consensus has always seemed to be that Killing Birds is a generic and rather forgettable splatter film that, title aside, had absolutely nothing in common with the Fulci classic.

Having now seen Killing Birds, I can say that the general consensus, in this case, is largely correct.  Killing Birds is generic, predictable, and ultimately forgettable.  However, taken on its own terms, it’s a perfectly enjoyable way for a lover of zombie cinema to waste 90 minutes.  As long as you don’t compare it to Zombi 2, i’ts a perfectly tolerable piece of trash that actually has one or two memorable moments tossed randomly through its running time.  At the very least, its a hundred times better than Umberto Lenzi’s similar Black Demons.

The film deals with a bunch of grad students who, while searching for a nearly extinct species of Woodpecker, end up spending the night at a deserted house in Louisiana.  Many years ago, a brutal murder was committed at this house and, well, you can guess the rest.  The grad students end up falling prey to a bunch of zombies, largely because the students are all remarkably stupid.  Meanwhile, B-movie veteran Robert Vaughn shows up as Dr. Fred Brown, a blind man who spends his days studying birds.  There’s a lot of birds in this movie and its never quite clear how they link up to the living dead but they certainly do look menacing flying past the camera.

With the exception of Vaughn (who overacts just enough to keep things interesting without going so far over the top as to become ludicrous), the film’s cast is likeable but not memorable.  Everyone’s playing a stereotype (i.e., the leader, the computer geek, the slut, the girl with looks and brains) and no one makes much of an effort to be anything more than a stereotype.  While this certainly keeps Killing Birds from displaying anything resembling nuance, it’s also strangely comforting.  Its lets a neurotic viewer like me know, from the start, that there’s no need to think too much about anything she might see for the next hour and a half.  Since this movie was made in the late 80s, most of the men sport a mullet and all of the women wear those terribly unflattering khaki pants that I guess were all the rage back then.

As I stated before, the film does have its occasional strengths.  Some of the deaths are memorably nasty (even if the gore effects are decidedly cut-rate, pun not intended).  As well, the film does an excellent job at capturing the hot, humid atmosphere of the Louisiana bayous.  I’ve spent enough time in that part of the country that I can attest that the movie perfectly captures the stagnant heat and the way dehydration can cause your mind to play tricks on you.  While the zombies themselves are hardly as impressive as Fulci’s, the filmmakers wisely keep them in the shadows for most of the film and, if nothing else, this allows the viewer to imagine something scarier than what they’re actually seeing.  Finally, this movie does have one of the most effective nightmare sequences that I’ve ever seen.  Lasting barely a minute and not really having much to do with the overall plot, this nightmare still features some rather disturbing imagery.  One image (of a crucified victim slowly smiling while hanging on a stark white wall), in particular, has so stuck with me that I found myself paying homage to it in a my own writing.

Though the movie’s director is credited as being Claudio Lattanzi, it is pretty much an open secret that the movie was actually directed by the infamous Joe D’Amato (who, regardless of what else he may have done during his storied life, also directed one of my favorite movies ever, Beyond The Darkness).  I’ve read a few interviews where D’Amato said that he allowed Lattanzi to be credited as director because he wanted to help Lattanzi’s launch his own career.  To judge by the movie itself, however, it seems more probable that Lattanzi wasn’t delivering the movie that D’Amato wanted and D’Amato stepped in as a result.  Regardless, Killing Birds is hardly the best example of D’Amato’s work but, at the same time, it’s hardly the worst either.

In the end, Killing Birds is a movie that will probably be best appreciated by those who already have a good working knowledge of Italian exploitation films.  It’s hardly a masterpiece (and, despite enjoying it, I would hesitate to even call it a “good” movie) but it’s not really deserving of all the criticism that it’s received over the years either.  As a bonus, the Anchor Bay DVD come with a lengthy interview with Robert Vaughn in which he discussed his career in B-movies and, while Vaughn says nothing about Killing Birds during the interview, he’s still interesting and enjoyable to listen to.  Unlike a lot of “reputable” actors who have made B-movies, Vaughn never condescends to the films that both started and ended his movie career.