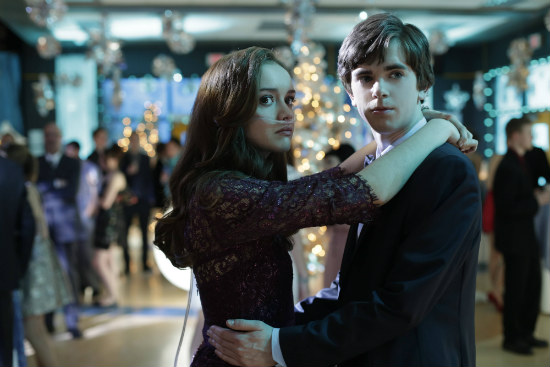 (Have you seen this episode yet?  If not, you might not want to read this review.  Spoiler warning!)

Well, we all knew that was going to happen, didn’t we?

To recap: During last night’s episode of Bates Motel , Norman (Freddie Highmore) asked Emma (Oliva Cooke) to attend a school dance with him.  Emma bought a really pretty dress and was obviously very excited to finally go out on a real date with Norman.  However, before Emma showed up for their date, Norman was upset by 1) Bradley (Nicola Peltz) showing up at the motel so that she could talk to Dylan (Max Thieriot) and 2) Norma (Vera Farmiga) telling him that she had been sexually abused as a child.  Once they got to the dance, Norman wouldn’t stop staring at Bradley and Emma finally lost her temper, told Norman to get a ride of home from someone else, and then left.

After getting punched out by Bradley’s boyfriend, Norman started to walk home in the pouring rain.  As always seems to happen whenever Norman is walking home, someone drove up and offered him a ride.  In this case, it was his overly concerned teacher, Miss Watson (Keegan Connor Tracy).  Miss Watson took Norman back to her place and, after washing the blood off his face, then said that she’d give Norman a ride home after changing clothes.

It was at this point that Norman started to hallucinate.  Norma suddenly appeared, sitting on a couch and demanding to know what type of teacher would actually take a student home with her and then go into her bedroom to change clothes without bothering to close the door first.

“You know what you have to do,” imaginary Norma told Norman.

One jump cut later, Norman was again walking in the rain and, as was revealed in the episode’s final scene, Miss Watson was lying dead in her bedroom with her throat cut.

This, in itself, wasn’t really a shock.  Simply by the fact that the show’s main character is Norman Bates, we already knew that he would have to end up killing someone by the end of last night’s season finale and Miss Watson, as an established character who wasn’t really central to any of the show’s storylines, was the obvious victim.  As such, what happened on last night’s episode wasn’t exactly surprising but it was still effectively handled.  While the show is often thought of as being a showcase for Vera Farmiga, Freddie Highmore has done such a good job of making Norman into a sympathetic character that it’s still somewhat upsetting to be reminded of just what Norman Bates is destined to end up doing.

Up until Norman and Emma left for their date, last night’s episode was dominated by both Norma and Vera Farmiga’s ferocious performance.  If I haven’t said it before, Vera Farmiga deserves (at the very least) an Emmy nomination for bringing Norma to such memorable life.  During last night’s episode, Norma enlisted the suddenly rather mysterious  Sheriff Romero (Nestor Carbonell)  to help her deal with Jake Abernanthy (Jere Burns).  In his calmly intimidating way, Romero confronted Abernanthy, told him that nobody did any business in his town without his permission, and then proceeded to gun Abernanthy down.  It was a moment that was as surprising as the death of Miss Watson was predictable.

And so concludes the first season of Bates Motel.  It’s been a frequently intruiging and occasionally frustrating season but, perhaps most importantly, it ended strong.  I’m still not totally convinced that there’s all that many stories available to be mined from a prequel to Psycho but I’m certainly looking forward to seeing what happens when this show returns next season.