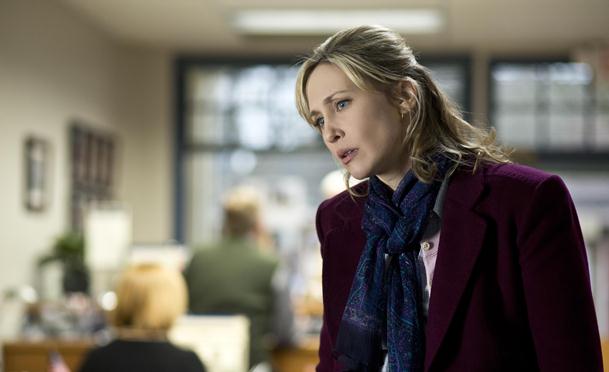 This week’s episode of Bates Motel was all about marijuana.

No sooner has Norma  (Vera Farmiga) recovered from finding the decaying corpse of Deputy Shelby in her bed then she’s having to deal with the hippies openly smoking weed out on the motel’s porch.  Now, I have to admit that some of my best friends are hippies but, for the most, they’re a lot more charming than the Bates Motel hippies.  The Bates Motel hippies are all incredibly dirty and rather rude.  Even worse, one of them has a guitar and insists on both playing and singing The Goo Goo Dolls’ “Slide” during all hours of the night.  Seriously, I thought Dylan (Max Thieriot) ran off the guitar-playing hippie last episode.  Maybe he came back.

However, as one of the hippies explains to Norma, the town’s entire economy is pretty much dependent on that huge marijuana farm in the woods.  So, the hippies can pretty much do anything they want without having to worry about being strung up in the town square and being set on fire.  In one of my favorite moments from last night’s episode, Sheriff Romero (Nestor Carbonell) drives up to the motel, calmly glances at the pot-smoking hippies, and then pretty much ignores them for the rest of his visit.

One of the hippies takes a liking to Emma (Olivia Cooke) and gives her a pot cupcake.  To the show’s credit, Emma doesn’t have a melodramatic freak-out or anything else that we’ve come to expect from television whenever a character tries drugs for the first time.  Instead, she gets rather realistically spacey and paranoid.  Hilariously, Emma’s stoned paranoia isn’t all that different from Norma’s natural paranoia.

Speaking of which, this week’s episode was also dominated by Vera Farmiga and her performance as Norma Bates.  Throughout this season, Farmiga has proven that she’s an actress who knows just how much scenery she can chew before losing credibility.  One the joys of this show is watching Farmiga continually take Norma to the edge of becoming a caricature and then pulling back at just the right moment.  Last night, we got to see Norma confront one of the annoying hippies about “smoking a doobie” on the motel’s front porch and physically attack a sleazy real estate agent for refusing to help her sell the motel.  And, of course, we can’t forget about the tres creepy scene where she climbs into bed with Norman (Freddie Highmore).

Norman, as always, is having issues of his own.  After having a dream about drowning Bradley (Nicola Peltz), he writes a short story about it.  Ms. Watson (Keegan Connor Tracy) is so impressed by the story that she volunteers to help Norman edit it.  When Norman tells her that he’s not sure if his mother would approve, Ms. Watson tells Norman that maybe they don’t need to tell his mother.  In fact, maybe it can just be their little secret.  As Ms. Watson talks to Norman, it becomes apparent that she’s interested in more than just being his teacher.

This leads, of course, to an interesting question.  Is there anyone in the town of White Pine Bay who isn’t crazy?

No wonder Jake loves this place!  Yes, despite having checked out of the motel, Jake Abernathy (the wonderfully creepy Jere Burns) is still around.  First he sends Norma flowers and then, at the end of the episode, he pops up in the back seat of her car and tells her that if she doesn’t pay him $150,000, he’s going to kill both her and her sons, therefore setting us up for next week’s season finale.

If there’s been a reoccurring theme running through my reviews of Bates Motel, it’s that this is a show that has struggled to define itself.  This first season has been spent trying to find a consistent theme and tone.  Over the past 9 episodes, whenever Bates Motel has attempted to be a straightforward thriller, the show has struggled.  However, when the show has accepted the inherent oddness of being a weekly prequel to Psycho, Bates Motel has succeeded.  Bates Motel is a show that benefits from going over the top.  Perhaps that’s why I enjoyed this week’s episode, Underwater, as much as I did.  Underwater was Bates Motel at its over the top best.