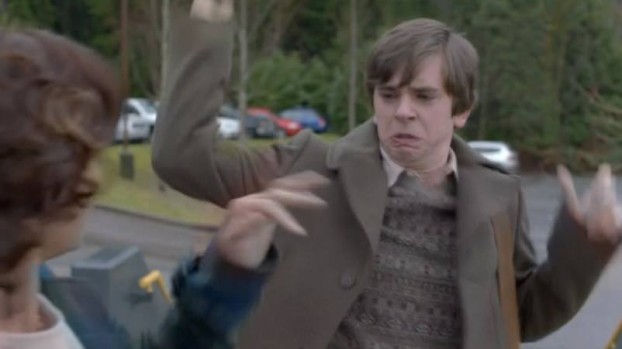 Last night’s episode of Bates Motel featured Norma (Vera Farmiga) trying to flirt her way to prosperity and out of trouble, Norman (Freddie Highmore) dealing with a therapist, Emma’s Dad (Ian Hart) waxing poetic about taxidermy, Dylan (Max Thieriot) pulling a gun on a pushy hippie, and Jake (Jere Burns) being brilliantly sleazy.  It was a lot of fun and a definite improvement over last week’s dour episode.

For those of us who are still invested in the idea of this show being a prequel to Psycho, last night’s episode was important because it opened with Norman learning about taxidermy from Emma’s dad, Will. Norman is getting his poor dog stuffed and mounted and, no offense to any taxidermists out there, but it’s all a bit creepy.  No wonder that, when Norma drops her son off at Will’s shop, she tells him that she’s not sure if Norman should be spending all of his time with dead things.  Despite the fact that Will points out that taxidermy makes Norman happy, I can actually see Norma’s point.  No mother looking forward to someday being able to play with her grandchildren is going to be happy about seeing her son taking up taxidermy or ventriloquism.

However, that’s the least of Norma’s problems.  Despite her attempts to first flirt with and then blackmail Sheriff Romero (Nestor Carbonell), Romero refuses to use his influence to help Norma get a seat on the town’s planning commission.  Instead, Romero, in that wonderful way that Nestor Carbonell has of being enigmatically threatening, tells her, “We’re not friends.”

Even worse, Norma can’t get Jake to leave the motel.  In one of the best scenes of the entire first season, Norma follows Jake when Jake drives out to Deputy Shelby’s boat.  (Or was it Keith’s boat?  Sometimes, I have a hard time keeping all the dead perverts of Bates Motel straight.)  When Jake discovers Norma watching him, Norma attempts to convince him that she hasn’t been following him.  Speaking in a chillingly child-like voice, Jake replies, “Where’d you hide it?”  (“It” being that sex slave who was last seen running off into the woods.)  Norma finally finds the strength to order Jake out of her motel and, despite the fact that Jake leaves, it’s pretty obvious that he’s not gone.

Meanwhile, at the high school, poor Emma is hiding in the girls room stall and using her inhaler (which brought back a lot of asthmatic memories for me) when she overhears a group of mean girls talking about how weird Norman is and how there’s no way Bradley (Nicola Peltz) would ever sleep with him.  This leads to Emma stepping out of the stall and telling them that Bradley did just that.  Words get back to Bradley, Bradley gets mad at Norman, and Norman ends up up having a mini-breakdown at school.  This leads to two scenes, a hilarious one where Norman and Norma attend a meeting with a therapist and a truly touching one in which Emma apologizes to Norman and tells him that she likes him.  Awwwwwwwwwwww!  Seriously, Norman and Emma are such a cute couple that it’s really a shame that one of them is destined to grow up to be a cross-dressing voyeuristic serial killer.

Finally, Dylan and Remo go on a road trip to pick up some hippies to work at the marijuana farm.  One of the hippies is a really obnoxious guy with a guitar and I spent the last half of the show worried that he was going to be a new regular character.  However, fortunately, he got on Dylan’s nerves so Dylan pulled a gun and left the guy and his guitar on the side of the road.  Yay, Dylan!

Since it first started two months ago, Bates Motel is a show that has struggled to find an identity.  That, in itself, is not surprising.  Few succesful TV shows look the same during their final season as they did during their first.  I recently rewatched the pilot episode of Lost and I was surprised at how different it felt from the show that Lost eventually became.  The fact that Bates Motel is struggling to find itself is not surprising.  What is surprising is just how different Bates Motel can feel from week to week.  Whereas last week’s episode felt a bit forced and melodramatic, this week’s episode felt a lot more self-aware.  This week’s episode was deliberately over-the-top and campy, in a way that acknowledged how ludicrous the series can occasionally be without ever descending to self-parody.  Bates Motel has already been renewed for a second season and hopefully, season 2 will look a lot like last night’s episode.