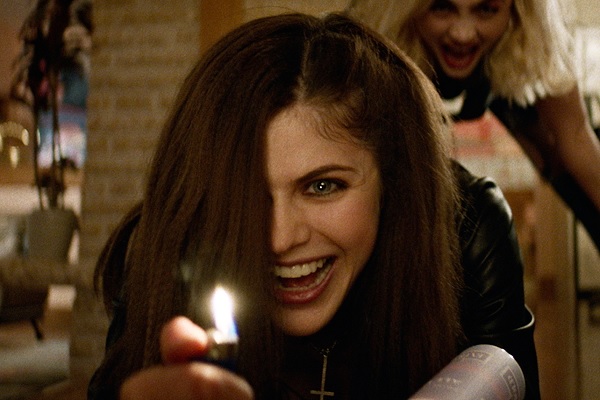 2019’s We Summon The Darkness is a horror/comedy that has got a devilish little twist that I can’t spoil in this review.

That’s a shame because, believe me, I would love to spoil it.  I would love to tell you all about the twist and about how much I love the twit and how clever I felt it all was but really, this is a twist that you need to experience for yourself.  I don’t know if it’s really possible to go into a movie blind anymore but if there’s any movie that benefits from being viewed with as little foreknowledge as possible, it’s We Summon The Darkness.

I can tell you that that movie takes place in Indiana in 1988.  It follows six people — three women and three guys — over the course of one long and very eventful night.  It starts with Alexis (Alexandria Daddario), Val (Maddie Hasson),  and Bev (Amy Forsyth) heading to a heavy metal concert out in the middle of nowhere.  As they head to the concert, we see glimpses over an evangelist (Johnny Knoxville) railing against heavy metal and Satanism.  We also hear some random news reports about some recent murders, all of which appear to have been the work of Satanists.  It’s obvious that this film takes place in a very religious community, one that feels it is currently under attack from the forces of darkness.

At the concert, the girls meet up with three dorky guys, Mark (Keenan Johnson), Kovacs (Logan Miller), and Ivan (Austin Swift).  Ivan is the leader of the guys, an outspoken atheist who is clearly skeptical of all of this Satanic panic.  Mark, meanwhile, is celebrating one last hurrah before heading off to Los Angeles.  Alexis invites the boys to come back to her father’s mansion, which is apparently empty for the night.  The boys agree and….

And that’s all I’m going to tell you about the plot.  In fact, I probably shared too much already.  What I will say is that the film takes you by surprise.  Just from reading about the film’s opening few minutes, you may think you know who these characters are but, instead, they surprise you.  You may also think that you know how all of the chaos at the mansion is going to play out but again, the film surprises you.

We Summon The Darkness is a clever and intense mix of horror and satire, one that keeps the audience guessing.  From the strong opening to the twisty conclusion, this is a film that grabs your attention and refuses to let it go.  Director Marc Meyers does a great job of ramping up the tension and he’s helped by a wonderful cast, all of whom bring their odd characters to life.  Alexandra Daddario and Ivan Swift are the cast stand-outs, with Daddario especially tearing through the film like a force of nature.  Though I initially assumed that Johnny Knoxville’s role was an example of stunt casting, he actually gives a good performance as a character who turns out to be far more important than you might initially assume.

We Summon The Darkness is worth summoning and watching. 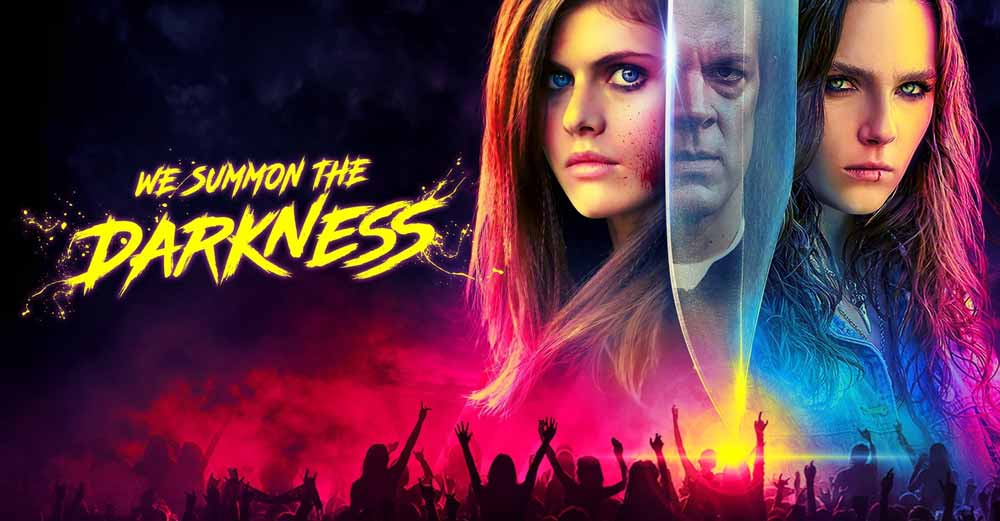