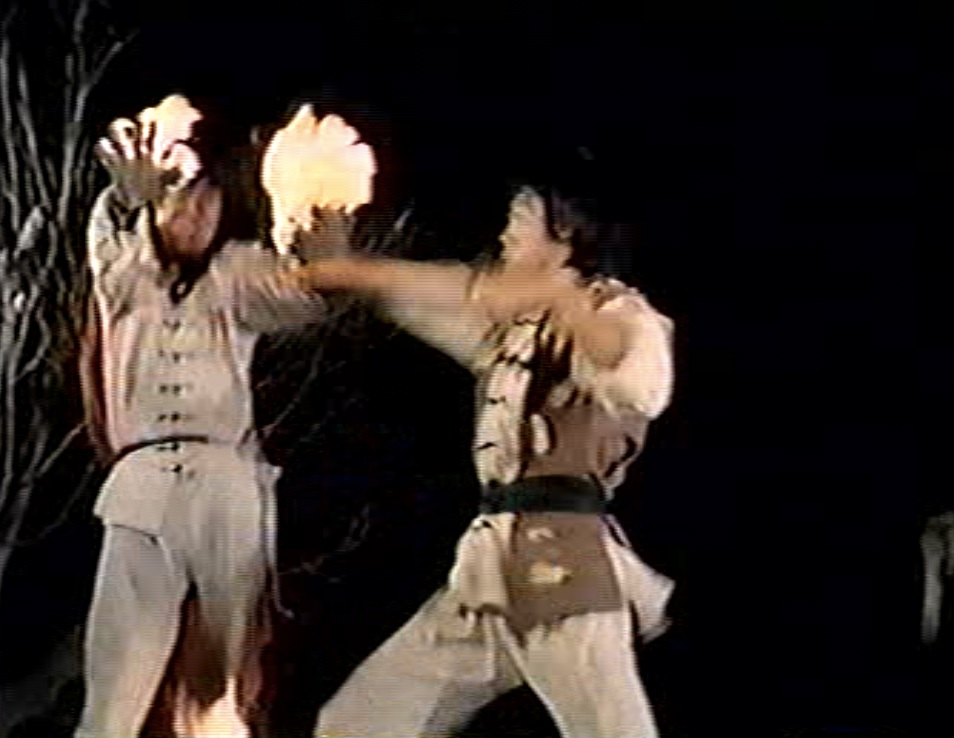 Kung Fu Zombie, a 1981 film that was produced in Hong Kong, tells the story of….

Well, it’s a little bit difficult to explain just what exactly it tells the story of.  I’ve watched it a total of three times over the past two months and I’m still not totally sure what’s going on in the movie.  Some of that is because, like many martial arts films, it was heavily cut and haphazardly dubbed when it made it’s way over to New York’s 42nd Street theaters.  Most of it, however, is because Kung Fu Zombie is a mess.  It’s a big, glorious, wonderfully entertaining mess.

Pang (Billy Chong) is a martial artist who is respected in town but who can’t get any respect from his father.  Even after Pang foils a bank robbery and and sends the bandit, Lu Dai (Cheng Ka Ying) to prison, Pang’s father, Fong (Chang Tao), continues to say that Pang is not good enough to inherit the estate.  As if to prove his point, Fong randomly attacks Pang whenever he gets a chance.  Pang usually fights his father until Fong has a heart attack and falls over.  Pang is never sure whether or not Fong is actually dead because apparently, Fong like to pretend to be dead so that he can attack Pang while the latter is celebrating his father’s death.

Anyway, Lu Dai comes back to town and recruits the local wizard, Wu Lang (Chan Lau), to create a bunch of zombies that he can then use to kill Pang.  Wu Lang creates the zombies but they don’t do much good.  When Lu Dai summons Pangs to the local graveyard and then attacks him, Lu Dai ends up falling in a coffin and landing on a bed of spikes.  Lu Dai’s body may be dead but his spirit is still following around Wu Lang, demanding a new body.

When Pang kills yet another criminal — a serial killer named Kwan Weig Long (Kwon Young Moon) — Wu Lang tries to put Lu Dai’s spirit into Long’s body.  However, Long is so evil and Wu Lang is such an incompetent sorcerer that, instead of allowing Lu Dai to take over Long’s body, Lang’s spell instead causes Long to come back to life as a vampire.  Soon, Long is roaming through the village, drinking everyone’s blood.  Whenever Long appears, the James Bond theme song plays on the soundtrack, which is odd but enjoyable.

Meanwhile, Lu Dai still needs a body.  Fortunately, Fong has died for real.  With so many different dead people walking around, can Pang bring peace and safety to the village?

Kung Fu Zombie is thoroughly berserk movie, one that mixes well-choreographed fights with moments of bizarre comedy and even stranger horror.  Now, admittedly, the film itself isn’t exactly scary.  I mean, the vampire looks fearsome but every time he appears, the Bond music starts up and it pretty much becomes impossible to take him seriously.  But, at the same time, how can you not appreciate a movie that not only steals the Bond theme but then uses it as the calling card of a serial killer-turned-vampire?  It’s just so weird that there’s no way you can’t love it.  Really, that’s pretty much the perfect description of Kung Fu Zombie.  It’s messy but the action is nonstop and the plot is wonderfully weird.  One gets the feeling that the director and his actors just made up the story as they were going along.  It’s impossible not to love it.

Kung Fu Zombie is a gloriously chaotic film and it’s currently on Tubi.  Watch it and keep a eye out for the dead.