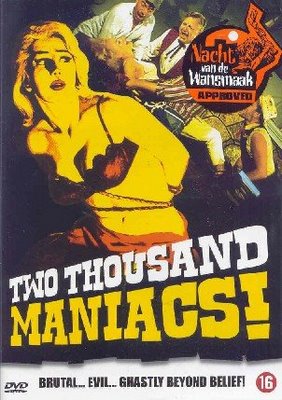 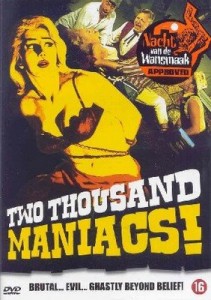 If there’s anything that I love almost as much as a good horror movie, it’s a good musical.  One of my favorite musicals is Brigadoon.  Brigadoon is about a ghostly Scottish village that only appears for one day every hundred years.  It was made into a film starring Cyd Charisse who is one of my favorite dancers of all time and who was also from Texas, just like me.    I first saw Brigadoon when I was 10 years old and I immediately fell in love with the film and I’ve devoted a lot of time lobbying for various high schools, college, and community theaters to put on a production of Brigadoon just so I can be in it.  Brigadoon is a pretty important film to me and, oddly enough, I have since discovered that it served as the basis for one of the most iconic drive-in horror films of all time, Herschell Gordon Lewis’ 1964 “gore film” 2,000 Maniacs.

In Two Thousand Maniacs, 6 people from up north (that’s a polite way of saying that they’re a bunch of obnoxious Yankees) end up getting stranded in the small Southern town of Pleasant Valley.  The overly friendly and accommodating townspeople explain that this is the Centennial Celebration of the day that the original Pleasant Valley was destroyed by the Union Army during the Civil War.  The Yankees are invited to take part in the celebrations and since they’re a bunch of condescending toadsuckers from the wrong side of the Mason-Dixon Line, they agree.  Hilarity ensues as the citizens of Pleasant Valley proceed to celebrate with traditions like sack races, bluegrass music, and finding different ways to dismember Yankee visitors who aren’t smart enough to leave town.  Since this is a Herschell Gordon Lewis movie, we not only get to see the dismemberments in full color detail but we also don’t actually care enough about the people being killed to be too upset at the notion.

I know that a lot of my fellow horror film fans absolutely love Herschell Gordon Lewis and his own unique brand of exploitation cinema.  Though I’ve enjoyed some of his films (Scum of the Earth and Something Weird come to mind) , I find Mr. Lewis to be more interesting as a character than as a director and I fear I might be too jaded to ever truly understand how “shocking” his gore-themed films apparently were.  (Of course, I should also admit to the fact that Lewis was a very prolific director and I’ve only seen a handful of his many films.)  That said, I think 2,000 Maniacs is probably Lewis’s best film and certainly the closest he ever came to making a film that actually felt like a real movie (as opposed to a gruesome home movie).  The story has a nice sort of rural legend feel to it, the murderous town’s people are well-cast, and a few of the film’s death scenes are genuinely disturbing.  (The barrel full of nails still makes me shudder and go “agck!”)  All in all, this is a very effective, fast-paced little horror movie and an obvious precursor for all future menacing redneck films.  Without 2,000 Maniacs, there would be no Straw Dogs but we won’t hold that against it.  (Well, maybe just a little…)

Ultimately, 2,000 Maniacs is a film for everyone.  Northerners will enjoy seeing the worst fears and prejudices of the South confirmed.  Meanwhile, Southerners (like me) will get the pleasure of seeing a bunch of smug Yankees get chopped up into little pieces.  It’s a win-win.