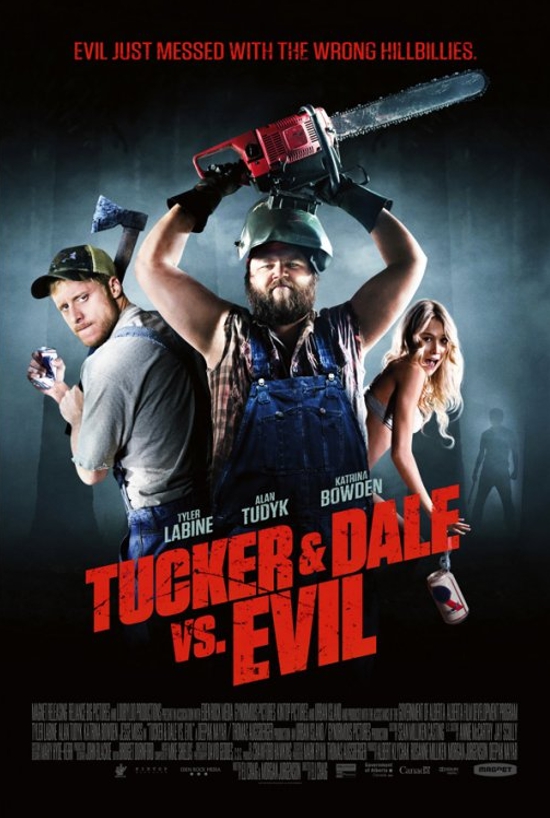 This film from 2010 mixes horror and comedy in a delightful way reminiscent of Sean of The Dead. This film takes common teen actors and teen slasher film actors like Jesse Moss [Dear Mr. Gacy, The Uninvited, Final Destination 3] and Katrina Bowden [30 Rock (TV), Piranha 3DD, The Shortcut] and pairs them with Tyler Labine [Rise of the Planet of the Apes, Mad Love(TV), Sons of Tuscon (TV), Reaper (TV), Zack and Miri Make a Porno] and Alen Tudyk [Napoleon Dynamite (TV), Transformers: Dark Side of the Moon, Conception]. This movie takes a very new and interesting look at horror movies as well.
This movie shows both the side of the paranoid teenager group, and that of what happens to be confused rednecks with bad luck, poor judgement, and horrible balance. When one of the teens becomes injured, about to drown, and abandoned by her paranoid friends, the redneck brothers take her back to their vacation cabin where they plan on spending some time fixing the place up. While in their care, she is in no fear of being harmed; however, the girls friends take it upon themselves to try and rescue her from what must be vicious killers. Due to a string of untimely accidents, the men do happen to appear as such and rack up the numbers of slaughtered teens.
If you are looking for a good funny time while still keeping in the horror genre, I would highly suggest watching Tucker and Dale VS. Evil. This movie will leave you laughing and thinking differently about many other movies you’ve seen.