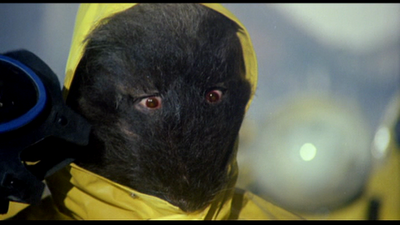 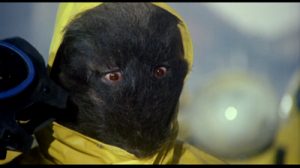 Can one scene make an otherwise thoroughly useless movie worth seeing?

That was the question I was forced to ponder as I wrote this review of 1984‘s Rats: Night of Terror.

Rats: Night of Terror opens in the 23rd century.  As the result of a nuclear war, Earth has been transformed into a barbaric wasteland.  While the majority of humankind has retreated underground, small bands of scavengers occasionally get dressed up like a New Order tribute band before coming to the surface and driving around on their motorcycles. The movie follows one group of survivors as they scavenge for food, come across a deserted ghost town, and eventually end up getting attacked by hundreds of rats.

For the most part, that’s the movie.  None of the characters are all that memorable and the so-called rats appear to be bored.  For the most part, the film wouldn’t even be worth reviewing except for the Scene.  After 90 minutes of languid mayhem, Rats: Night of Terror comes up with one scene that manages to be odd, brilliant, and numbingly stupid all at the same time.  The Scene simply has to be seen to be believed.

Director Bruno Mattei often said that Rats: Night of Terror was his personal favorite out of the countless number of exploitation films that he directed.  While it’s generally agreed that Mattei was responsible for making some of the worst films in history, I’ve always had a sneaky admiration for him.  It’s hard not to love someone who defies the odds while pursuing his dream.  Mattei’s dream was to make movies and he never let a thing like budget or talent to stand in his way.  While Mattei is best known for taking over the direction of Zombi 3 after Lucio Fulci walked off the set, he was a prolific director who dabbled in every genre.  Rats: Night of Terror is his contribution to the post-apocalyptic genre.

For a brief period in the 1980s, Italian exploitation filmmakers moved away from cannibals, gialli, and zombies and instead concentrated on making movies about post-apocalyptic bikers.  For the most part, I’ve never been a huge fan of these Italian versions of The Road.  There’s an overwhelming blandness to them.  If the underlying goal of Italian exploitation cinema was to make movies that could pass for American studio productions, then the postapocalyptic genre is the closest the Italians came to accomplishing that goal.  As opposed to the zombie films or the gialli, the only thing that was obviously Italian about the majority of these films was George Eastman.

Rats: Night of Terror, strangely enough, does not feature George Eastman.  What it does feature is a lot of gerbils.  We’re continually told, throughout the movie, that these gerbils are actually rats but no, they’re gerbils and they’re pretty obviously not only gerbils but cute gerbils too! 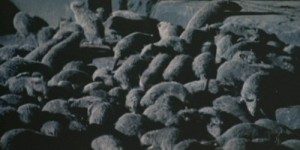 I’m sure I’m not the only person out there who has a strong phobia of rats.  I can still remember when I was 12 years old and visiting my grandad’s farm in Arkansas.  I was exploring an old barn with my older sister, Erin.  The barn, which already smelled like death, was also full of hay and, within a few minutes of stepping inside, I stared to have trouble breathing.  I stepped outside, used my inhaler, and leaned up against the barn’s wall.  As I caught my breath, I heard a very distinct squeaking coming from inside the wall.  I jumped away from the wall, spun around, and realized that I had been resting my head against a small hole.  Staring contemptuously at me from inside that hole was a really ticked-off looking rat.  No matter how many times I washed my hair that day (and, believe me, I washed and rewashed it a lot), I could not stop imagining the feeling of germ-ridden rodents running across the back of my head.

Ever since that day, whenever I’ve seen a rat in a movie (or, God forbid, real life), I’ve remembered that feeling and it still makes me shudder.  It’s a reminder that, in the end, we’re all going to end being devoured by the same scavengers.

On the other hand, whenever I see a gerbil, I’m reminded of that episode of South Park where Mr. Garrison, attempting to get fired, makes Mr. Slave his new teaching assistant.

And whenever I see Rats: Night of Terror, I’m reminded of the Pandemic episodes of South Park because the gerbils in this film appear to be about as naturally aggressive as a bunch of guinea pigs dressed up like pirates.

Yes, Rats: Night of Terror has a lot going against it.  The characters are boring, the rats are gerbils, and the director is Bruno Mattei.  It would be easy to dismiss this film if not for the Scene.  Oh, how I wish I could tell you something about the Scene without giving the whole thing away.  I wish there was some way I could safely expand on just how weird and silly and oddly wonderful the Scene is.

I’ll give you a clue about the Scene.  It happens at the end of the movie.  It makes absolutely no sense and it is so extremely odd that it actually makes you wonder if maybe the entire film was meant to be somehow satiric.  What’s especially odd is that most viewers usually guess what the Scene is going to be halfway through the film before then thinking, “No, no way.  There’s no way that’s going to happen.”

So, to a return to the original question, can one scene make an entire film worth seeing?

In the case of Rats: Night of Terror, the answer is yes.