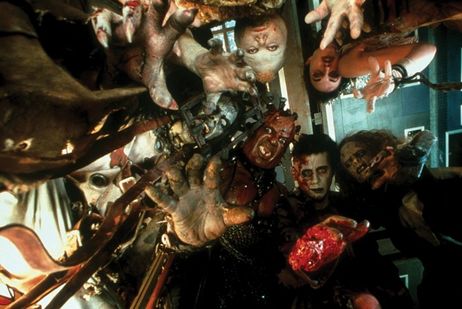 Oh my God, this 2001 haunted house movie scared the Hell out of my when I was way too young to know any better.  Seriously, it would come on HBO late at night and I would secretly watch it with the sound turned down and just the visuals would freak me out.

That lawyer getting chopped in half by the glass doors?  AGCK!

All of the ghosts suddenly appearing and then just as quickly disappearing?  AGCK!

Seriously, I had nightmares about those ghosts!

For this month’s horrorthon, I decided to rewatch Thirteen Ghosts and … well, first of all, I was reminded by the DVD that apparently, the name of the film is not Thirteen Ghosts.  Instead, the proper name is Thir13een Ghosts, which is really kind of annoying because it’s not like that “13” even vaguely resembles a “T”.  I’m not even sure how exactly you would pronounce Thir13een.  Wasn’t one of the robots in the last Star Wars film named Thir13een?  Just looking at the title makes me think about that episode of South Park where Cartman went into the future and had a robot dog named K-10 (and a cat named Kit-9 and a bird named Kok-A-3!)

So, no offense meant to anyone who was involved in the naming of the film, but I’m going to keep calling it Thirteen Ghosts!

Anyway, I decided to rewatch Thirteen Ghosts because I remembered it as being the scariest film ever made and … wow, it really did not stand up to the test of time.  I mean, don’t get me wrong.  The ghosts were still kind of scary and I guess that Tony Shalhoub did the best that he could do with the material.  But the movie itself…oh my God.

Seeing as how I’m contractually obligated to come up with at least 500 words about Thirteen Ghosts, let’s talk about the plot, shall we?  Tony Shalhoub is Arthur.  Arthur’s a widower who has two children, Kathy (Shannon Elizabeth) and Bobby (Alec Roberts).  For some reason, Kathy is obsessed with sink fixtures.  Bobby, meanwhile, is your typical bratty kid.  Arthur is like way poor and about to lose his house.  Despite this, he continues to employ a housekeeper named Maggie (Rah Digga).  HEY, ARTHUR, THERE’S NO POINT IN HAVING A HOUSEKEEPER IF YOU CAN’T AFFORD YOUR FREAKING HOUSE!

Fortunately, Arthur is informed that his uncle, a legendary ghost hunter named Cyrus (F. Murray Abraham) has died and, as a result, Arthur has inherited his mansion!  YAY!  PROBLEM SOLVED!  Of course, the mansion is kind of weird.  The walls are covered with Latin phrases and it’s all glass.  “I do not do windows,” Maggie says.  Ha ha ha.

Well, it turns out that the entire house is full of murderous ghosts.  (Of course, you can’t see them unless you put on special glasses.)  We occasionally get glimpses of the ghosts and this is where Thirteen Ghosts actually triumphs.  The ghosts actually are really freaky looking and they’ve all got enjoyably weird backstories.  That’s a good thing.

What isn’t a good thing is that, in order for the ghosts to get free and wreck some havoc, everyone in the house is required to act like a total idiot.  Hence, we get Shannon Elizabeth staring at herself in a mirror for literally four minutes, just so one ghost can sneak up behind her.  We get Bobby and Maggie constantly running off.  We also get Embeth Davidtz as a “spirit liberator” and Matthew Lillard as a psychic.

Does Matthew Lillard give a good performance in Thirteen Ghosts?  It’s hard to say.  He definitely gives a performance that could only be given by Matthew Lillard.  There’s a few scenes where you do wish someone on set had told him to calm down but, on the whole, you can count me in the pro-Lillard camp.  It’s a silly film and it needs someone willing to give a silly performance.

There are a few parts of Thirteen Ghosts that have stood up well.  The ghosts, the production design, the scene with the lawyer.  But ultimately, the movie fails because you really don’t care about Arthur or his family or his housekeeper.  In these type of films, the main characters either have to be likable or they have to be so unlikable that you don’t mind seeing them get terrorized.  But bland just will not get the job done!

Since I love lists, here’s my ranking of the ghosts, from least to most frightening:

Anyway, the movie’s not as scary as I remembered but those ghosts are still Agck-worthy.