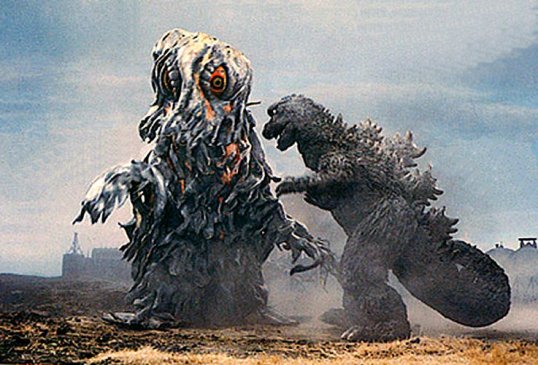 First released in 1971, Godzilla vs. Hedorah is, to put it lightly, a weird freaking movie.  Judging from the reviews and the comments that I’ve read online, it’s also widely considered to be one of the worst of the Godzilla films.  I watched it earlier today and — well, yes, it’s not exactly Godzilla’s finest moment.  However, I’d be lying if I said that I didn’t enjoy Godzilla vs. Hedorah.  It’s just such an odd movie.

When Godzilla vs. Hedorah was originally released here in the states, it was retitled Godzilla vs. The Smog Monster.  That’s right!  This is a Godzilla film with a message!  And that message is “Stop polluting the planet or else a meteorite will crash into the ocean and cause all of the waste to take on sentient form.”  And, just in case you can’t pick up on that message despite the fact that the film is about an actual smog monster, the movie’s theme song makes the message even more explicit.  Both the theme song and the James Bondesque opening credits also serve to remind us that this isn’t your typical Godzilla movie.

Godzilla vs. Hedorah starts out with a child named Ken who idolizes Godzilla and is worried about all of the muck that he sees floating in the water.  “If Godzilla saw this,” Ken tells us, “he wouldn’t be very happy.”  Ken also has dreams in which Godzilla arises from the ocean and uses his radioactive breath to set all of the world’s pollution on fire.

No sooner has Ken read an essay that he’s written about pollution then Hedorah comes to life and starts destroying Japan.  Oddly enough, nobody in the film seems to be that upset about the imminent end of the world.  However, according to Wikipedia, this was the 11th Godzilla film and I suppose that, after the 5th or 6th giant monster attack, it’s reasonable that people would adopt a somewhat blasé attitude towards them.

Anyway, Hedorah is destroying Japan by flinging around acidic sludge, a bunch of hippies decide that, seeing as how the world is doomed anyway, they might as well party on Mt. Fuji, and Ken’s father tries to figure out a way to defeat Hedorah.  Meanwhile, Godzilla comes to the aide of humanity and you have to wonder why.  The film implies that he’s been moved by Ken’s faith in him but, to be honest, Godzilla goes through this entire film looking somewhat annoyed by everything, including Ken.  He’s willing to fight Hedorah but he doesn’t seem all that emotionally invested in it.

(If anything, Godzilla reminded me of how our cat Doc acts if he’s see a cat in the alley right before dinnertime.  Doc might hiss once or twice but it’s pretty clear that his main concern is getting back inside so he can eat and then take a nap.  The hissing is just to make sure the rest of us know that Doc’s not losing his touch.)

As I said before, Godzilla vs. Hedorah is not necessarily a good movie but it sure is strange!  How strange is it?  Well, let’s just take a look at Hedorah:

Personally, I think Hedorah looks more like Cthulhu than a smog monster but regardless, he’s certainly memorable.

However, there’s more to the strangeness of this film than just Hedorah.  Godzilla vs. Hedorah was the first Godzilla film to be made in the 1970s and its obvious that director Yoshimitsu Banno wanted to make sure that his Godzilla film stayed up with the times.  Hence, along with a heavy-handed political message, Godzilla vs. Hedorah features every single technique that was considered to be cutting edge in 1971.

This film’s got them.

Hmmm…kinda.  There’s a few scenes where — for no particular reason — we see a dozen or so tv screens, all featuring a dozen or so talking heads talking at once.

A random dance scene with groovy camera angles and gratuitous use of the zoom lens?

Yes.  In fact, that was my favorite scene in the movie.

And, of course, there are the cartoons.  Whereas modern movies would probably waste a lot of money on a lot of CGI to show us how Hedorah was created and grew, this movie shows us with random cartoons.  And you know what?  The cartoons are actually a lot more fun than any CGI ever could be.

In many ways, those cartoons perfectly sum up the appeal of Godzilla vs. Hedorah.  They’re silly and a little stupid but how can you not enjoy them?  Godzilla Vs. Hedorah isn’t exactly good but it’s definitely a lot of fun.