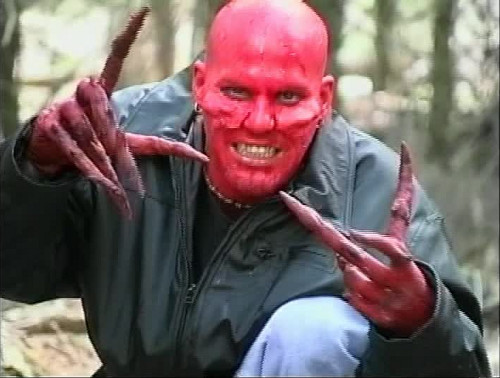 Anyway, Demon Slaughter was originally released in 2004 and it tells the story of Jimmy (Adam Berasi), who is some sort of criminal who apparently owes money to a bunch of other criminals.  So, naturally, Jimmy goes on a shooting rampage and kills a lot of people.  This, of course, leads to Jimmy’s girlfriend being brutally murdered.  Jimmy then flees to a cabin where he meets a red-faced demon, deals with a horde of zombies (many of who appear to be smiling as Jimmy shoots at them), and has a vision involving several naked women.  After a fairly impressive scene that features someone melting, Jimmy ends up getting into a theological discussion and the film’s final twist is revealed!

The first half of Demon Slaughter didn’t do too much for me.  There was nothing supernatural.  Instead, it was just people running around with guns, talking tough, and shooting at each other.  I imagine everyone had fun filming those scenes (boys always like to do the whole bang! bang!  You’re dead! thing) but it was kind of tedious to watch.  As well, the sound kept going in and out.  I’m not sure if that was a production issue or if it was just a problem with my DVD.

But then, once, Jimmy was in the cabin and shooting at all the zombies, the film got a bit more entertaining.  While the special effects weren’t exactly convincing, they did have a definite DIY charm to them.  Plus, that melting face was pretty cool!