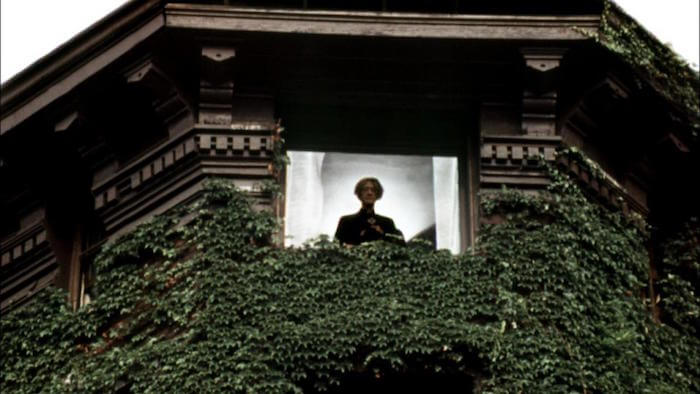 If someone offers you a cheap but roomy apartment in New York City, run!

Seriously, this is not only the main lesson of the 1977 horror film The Sentinel but it’s also a lesson that can be learned from almost every horror film set in New York. The only cheap apartments are either in slums or else in haunted brownstones. If you’re not having to pay a lot and you’re told that you can move right in, there’s a good chance that your neighbors are all going to be in a cult. Either that or they’ll all be undead.

And, if there’s a blind priest staring out a window on the top floor, run! Especially if that priest is played by John Carradine!

See, that’s the mistake that Alison Parker (Cristina Raines) makes at the start of this movie. Instead of turning around and running, she instead decides to move into a suspiciously cheap and large apartment. Even though she’s been informed that the only other people in the building are the priest and a violinist, Alison is somehow not shocked when she meets her neighbors.

For instance, there’s Gerde (Sylvia Miles) and Sandra (Beverly D’Angelo), who both delight in freaking Alison out with their 70s style decadence. And then there’s Charles (Burgess Meredith), an eccentric old man who insists that Alison come to a birthday party that he’s having for his cat. Has Alison never seen a movie before? Does she not know that Burgess Meredith spent a good deal of the latter part of his career playing emissaries of the devil?

Alison does have some issues of her own, most of which involve the fact that her dead father keeps showing up and haunting her. There’s also the stress of dating a lawyer (played by Chris Sarandon) who may or may not have murdered his ex-wife. Personally, I would just leave the apartment but, for what I understand, nice apartments aren’t easy to come by in New York. Do you run the risk of having to spend a $2,000 a month on a utility closet or do you stay in the apartment that might be next to the portal from Hell? It’s a difficult decision.

Anyway, The Sentinel is pretty dumb. Cristina Raines gives a good performance in the lead role but Alison still isn’t a particularly sympathetic lead character and the film is so abysmally paced that it’s a bit of a chose to sit through. Director Michael Winner tells the story as if he himself got bored with it. On the plus side, there are a lot of interesting people in the cast. Along with Meredith, Sarandon, Carradine, Miles, and D’Angelo, small roles are played by — deep breath — Martin Balsam, Jose Ferrer, Ava Gardner, Arthur Kennedy, Deborah Raffin, Eli Wallach, Christopher Walken, Jerry Orbach, William Hickey, Jeff Goldblum, and Tom Berenger. For those keeping track, that’s a total of 10 Oscar nominees (and 4 winners) who apparently didn’t have anything better to do but appear in this silly film.

On the plus side, you can keep an eye out for the famous faces. On the negative side, you have to sit through this movie to see them.