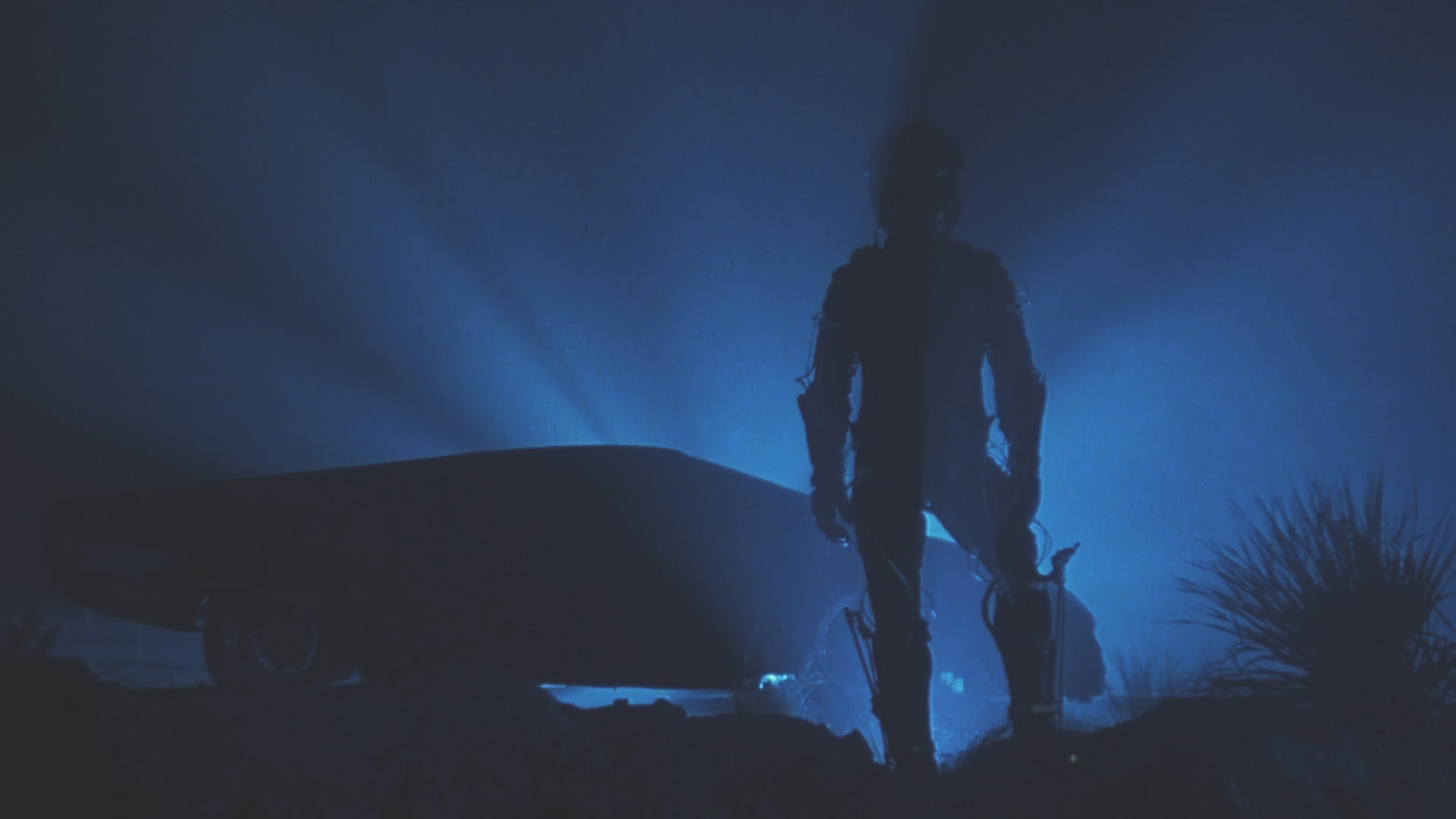 So, let me see if I’ve got this straight.

The 1986 film, The Wraith, takes place in a small town in Arizona. Despite the presence of a grimly determined, tough-talking sheriff (played by Randy Quaid, no less), the town is basically dominated and controlled by Packard Walsh (Nick Cassavetes) and his gang of teenage car thieves. Despite the fact that no one in his gang appears to be particularly intelligent or even intimidating (one of them is said to drink motor oil), Packard has somehow managed to make himself into one of Arizona’s biggest crime lords. He and his gang stop people on the highway and force them to race for possession of their car. As Packard’s second-in-command, Rughead (Clint Howard) puts it, “You lose the race, you lose your car!” Remarkably, people just seem to go with this. Several people race Packard’s crew and most of them lose and none of them seem to have an issue with handing over the keys to their car as a result.

However, a new and mysterious car has suddenly shown up. It’s a black car, with darkened windows. It’s engine literally glows. When Rughead takes a look at it, he announces that it’s not like any engine that he’s ever seen before. No one knows who drives the car but, when Packard demands that the car race against a member of his crew, the unseen driver agree. For the first time, Packard’s gang doesn’t win the race. Instead, one of them ends up dead. And then another ends up dead. And then another. Soon, Packard’s associates are dying left and right. As for the car, even after it goes over a cliff and explodes, it still somehow reappears.

Meanwhile, a new kid has shown up in town. Jake (Charlie Sheen) refuses to reveal anything about his past but he apparently reminds everyone of Jamie, a romantic rival of Packard’s who was murdered by Packard’s gang. Both Jamie’s brother (Christopher Bradley) and Jamie’s former girlfriend (Sherilyn Fenn) feel an automatic bond with him. Jake, however, seems to be almost obsessed with Packard and his gang.

Of course, they’re related! The fact that they’re related is one of the most obvious plot developments in cinematic history. What’s interesting is that, despite it being totally obvious that Jake is the one killing off Packard’s gang, nobody else in the film ever seems to even entertain this as being a possibility. Instead, they seem oddly content to just assume that the members of the gang have just run into a spate of bad luck as far as all of the deaths are concerned. Instead of being concerned with the fact that one of their victims has come back from the dead and is now killing them one-by-one, each member of the gang seems to be convinced that he’ll be the one to finally outrace the mysterious, immortal car with the extraterrestrial engine.

As I mentioned before, the characters in The Wraith aren’t exactly the most brilliant out there….

Incredibly stupid characters aside, The Wraith is a fast-paced action/horror/sci-fi hybrid. The Wraith rips off a lot of other movies (with The Terminator serving as an obvious inspiration for the indestructible driver) but at least it rips off the right parts. Add to that, Charlie Sheen, Nick Cassavetes, Clint Howard, and Randy Quaid all give entertainingly weird performances. Sheen’s inability to convincingly show human emotion actually works to his advantage here, as he’s not exactly playing a human character. Meanwhile, Cassavetes, Howard, and Quaid all overact with the type of panache that can only be possessed by a good actor appearing in a silly movie.

Indeed, there’s no doubt about it: The Wraith is a very silly movie. But it doesn’t waste any time and it’s just ludicrous enough to be entertaining.