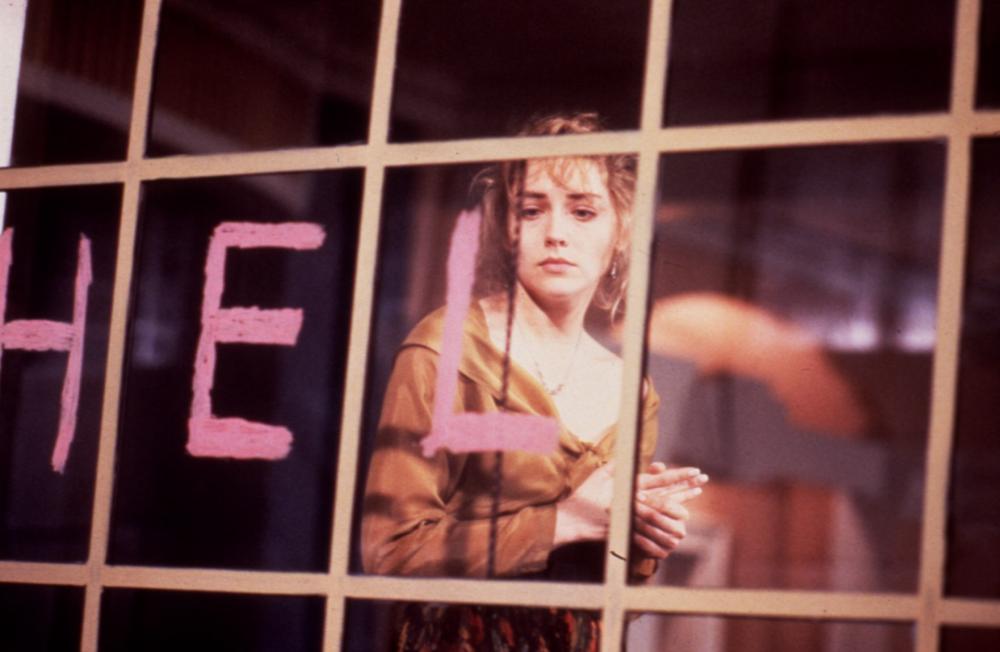 The plot of the 1991 film, Scissors, is not easy to describe. That’s not because the plot is particularly clever as much as it’s because it doesn’t make much sense.

Basically, Sharon Stone plays a woman named Angela Anderson. She is oddly obsessed with scissors and terrified about getting close to anyone. She’s been getting hypnotherapy from Dr. Carter (Ronny Cox) in an effort to understand why she’s so repressed but she doesn’t seem to be getting anywhere. This could possibly have something to do with the fact that Dr. Carter is continually distracted by the adulterous activities of his wife, Ann (Michelle Phillips).

Angela lives in a lonely but surprisingly big apartment with only her cat for company. Her cat is named Midnight and he’s a black cat so he automatically became my favorite character in the film. Living next door to her are two twin brothers. Alex (Steve Railsback) is a soap opera star. Cole (Railsback, again) is a wheelchair-bound artist who continually paints cartoonish pictures of Angela being attacked by a man with a big red beard.

Then, one day, Angela goes out to buy some scissors. When she returns and gets on the elevator to head back up to her apartment, she’s attacked by a man …. A MAN WITH A RED BEARD! Fortunately, Angela is able to stab him with her scissors. After the man with the red beard runs off, Angela is discovered in the elevator by Alex and Cole. Alex and Angela fall in love. Cole’s not too happy about that.

Angela get a call about a job interview, one that requires her to go to a stranger’s apartment. Despite the fact that the film has spent nearly an hour setting up Angela as being intensely agoraphobic, she has no problem going to this apartment. However, once she enters the apartment, she finds herself locked in! She also discovers that the red-bearded man is also in the apartment. Fortunately, he’s dead. Unfortunately, it appears that he was killed by Angela’s scissors. There’s also a raven in the apartment. The raven continually taunts Angela, saying, “You killed him!” Let’s just be happy that Edgar Allan Poe wasn’t around to see this.

Trapped in the apartment, Angela has flashbacks to her past. Is Angela the murderer? Is all of this just happening in her mind? Or is someone trying to drive her over the edge?

Though Scissors is set up as a psychological horror film, it’s really more of an extended acting exercise for Sharon Stone. Stone wanders around the apartment. She talks to herself. She had a nervous breakdown or two. She discusses life with a puppet. Every single scene seems to be designed to make audiences go, “Wow, she really can act!” but, despite all of the histrionics on display, Angela is still a very one note character. By making her obviously unstable from the start, the film doesn’t really leave the character with much room to develop or take us by surprise. The film attempts to end on a bit of an ambiguous note as far as Angela’s character is concerned but that type of ambiguity has to be earned. There’s nothing to Stone’s performance to indicate that there’s anything about Angela that isn’t totally on the surface. To suggest that there was more to her than originally appeared is to insult the audience’s ability to discern hidden depths.

The film does eventually wrap up its mystery and present a solution of sorts. Unfortunately, it’s a totally unsatisfying solution and one that’s dependent on otherwise intelligent people coming up with a ludicrously overcomplicated scheme to deal with one not particularly complicated problem. It’s all pretty forgettable but at least the cat survives.