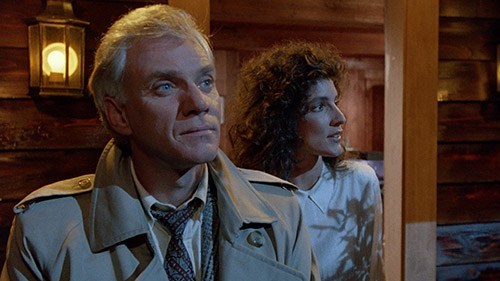 How odd is it?

It’s so odd that it’s difficult to know how to even describe it. On the surface, it’s a film about two people in a house. The Girl (Madolyn Smith) — and that’s how she’s credited at the end of the film — is staying in a secluded house in the woods. There’s a nearby town but, when the Girl stops there to get some gas, it’s impossible not to notice that there aren’t any other people around. When the Girl reaches the house, she makes a phone call and asks to speak to her daughter. From what we hear of her say to her daughter, it sounds as if The Girl is recovering from some sort of trauma.

After the Girl hangs up the phone, the Caller (played by Malcolm McDowell) knocks on her front door. The Caller seems to be a polite Englishman. He says that he’s recently had some car trouble and he asks if he can come in the house to use the Girl’s phone. The Girl lets him in but, as soon as The Caller enters, it becomes apparent that he was lying about having car trouble.

The Girl and the Caller talk. In fact, they spend several days talking. Sometimes, they’re friendly to each other and other times, they’re not. Their stories keep changing. At one point, the Caller claims that he’s a police detective and that he’s investigating a murder in the area. At another point, the Girl claims that she was responsible for the Caller’s car not working. We start to get the feeling that the Girl and the Caller might know each other and that each knows that the other is lying. Things get stranger as the night turns into day and then night again. The Caller appears to be leave but, just as mysteriously, he shows up again. The Caller tries to enter one particular room in the house. The Girl fights to keep him from doing so. The two of them taunt each other. Sometimes, they threaten each other. At times, they seem to be almost dependent on each other and you wonder if the Girl really wants the Caller to leave. They start keeping track of who is collecting the most points as they play a game that only the two of them seem to understand.

And it just keeps going and going. As many times as the Girl and the Caller both say that they’re done with conversation or that they’re leaving, neither can seem to abandon they other. Instead, they keep circling each other, like two trapped animals continually challenging one another for control. It all leads to a twist, one that you probably won’t see coming. Admittedly, the twist itself does seem to come out of nowhere but, because the film has been so weird up until that moment, the bizarre randomness of it all seems totally appropriate.

At times, The Caller can feel like a bit of an endurance test. McDowell and Smith are the only two people in the film and they spend the entire movie engaging in cryptic conversations that only seem to make sense to themselves. It’s not always easy to follow them as they go from one topic to another. Fortunately, both Smith and McDowell give excellent performances, ones that keep us guessing as to their true motivations and which also keep us interested in their enigmatic characters. You become invested in their drama, even if you don’t always understand it. The Caller is not a film for everyone but horror fans looking to take a chance on something a little different will be well-rewarded.