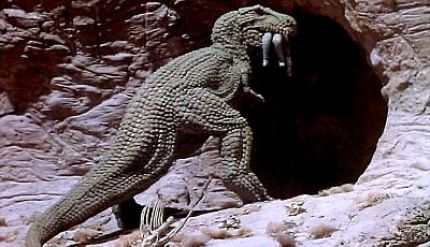 This 1977 film begins with a bunch of goofy-looking astronauts crash-landing on a desert planet. After their spaceship slowly sinks into a lake, the astronauts try to set up camp so that they can wait to be rescued. Unfortunately for them, there’s some dinosaurs living on the planet and the astronauts soon find themselves being stalked by prehistoric predators!

Now, it’s true that I said that this was unfortunate for the astronauts. However, it’s very fortunate for us the viewers because the dinosaurs are a hundred times more adorable than the astronauts. This is one of those low-budget sci-fi films that made use of model dinosaurs and stop motion animation so there’s something just undeniably fun about watching a bunch of hammy, unknown actors pretend to be terrified of what appears to be a child’s toy. (The most menacing of the dinosaurs is a dead ringer for the dinosaur from the Toy Story films.) This is a deeply silly movie but, if you’re a fan of dinosaurs and old-style special effects, you’ll find a lot to enjoy. Just don’t make the mistake of taking anything about it seriously. Of course, the fact that the majority of the astronauts look like they should be dancing under a disco ball instead of exploring space will probably ensure that you stop taking the film seriously long before even the first dinosaur shows up.

In fact, my only real complaint about this film is that there simply aren’t enough dinosaurs. Yes, there’s a T-Rex. And yes, there’s that one-horned dinosaur that looks like a really dangerous armadillo. There’s a few other dinosaurs as well but, to be honest, I feel like a Planet of the Dinosaurs should just be crawling with them. Instead, it appears that there were only six or seven dinosaurs on this planet.

Now, you might be wondering how all these dinosaurs showed up on the planet. Early on, one of the astronauts establishes that the planet is on the same “evolutionary track” as Earth, it’s just several years behind. So, apparently, there are dinosaurs on every Earth-like planet. I guess that’s fine but I was hoping for a Planet of the Apes-style reveal, with the Statue of Liberty or some other monument suddenly showing up. A planet where dinosaurs evolved from men? That would have made the movie a true classic!

Even without the Statue of Liberty, Planet of the Dinosaurs is fun. Silly, but fun.