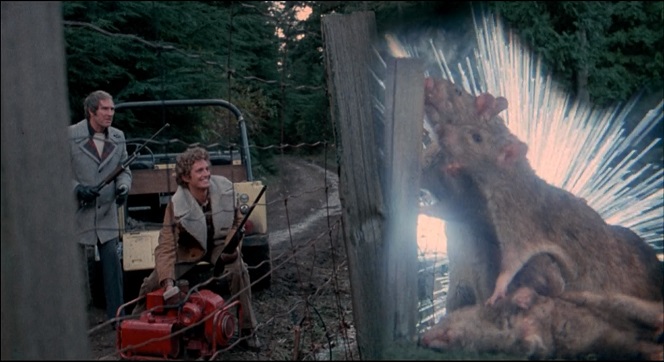 Uh-oh! Something weird has bubbled up to the ground on an island near British Columbia and a farmer and his wife (played by John McLaim and Ida Lupino) foolishly decided to feed it to their farm animals! Soon, they’ve got giant chickens! And listen, that might sound like a good thing to some but I’ve spent enough time around farms to know that giant chickens are not a good thing! Seriously, normal-sized chickens are messy enough. Giant ones? I don’t even want to thinking about it.

Of course, Morgan isn’t the only one interested in the so-called Food of the Gods. There’s also Jack Bensington (Ralph Meeker), who owns a dog food company. Jack wants to sell the food. Why would Jack want to do that? Does he actually think that causing dogs to transform into giants who would undoubtedly try to kill their masters is somehow going to be good for his company’s reputation? Jack’s main motivation seems to be that he’s a businessman and, in this film’s moral universe, that automatically makes him one of the bad guys. But it seems like even an evil businessman would know better than to kill off all of his customers.

This 1976 film, which is loosely (very loosely) based on a novel by H.G. Wells, was directed by Bert I. Gordon and, if you think the plot sounds a little ludicrous …. well, it is. Nothing about the film really makes much sense but that’s kind of to expected from a Bert I. Gordon film. Gordon specialized in making films about giants destroying stuff. The films were never particularly good but Gordon obviously understood that American filmgoers love big things. Food of the Gods, as silly as it may be, apparently made a lot of money when it was first released.

Today, of course, it’s impossible to watch the film without noticing just how terrible the special effects are. Between the unconvincing use of super-imposed images and the obviously fake rats that are tossed at some of the actors, there’s not a single shot that doesn’t somehow look totally ridiculous. In fact, it’s all so silly and obviously done on the cheap that it becomes rather charming, or at least as charming as the superimposed image of giant wasp ever could possibly be. You have to admire the film’s determination to tell its story despite not having the resources to do so. As for the rest of the film, it’s dumb but it doesn’t take itself too seriously. If you’re specifically searching for a bad giant animal movie, The Food of the Gods is fun in its own goofy, nonsensical, low-budget way.