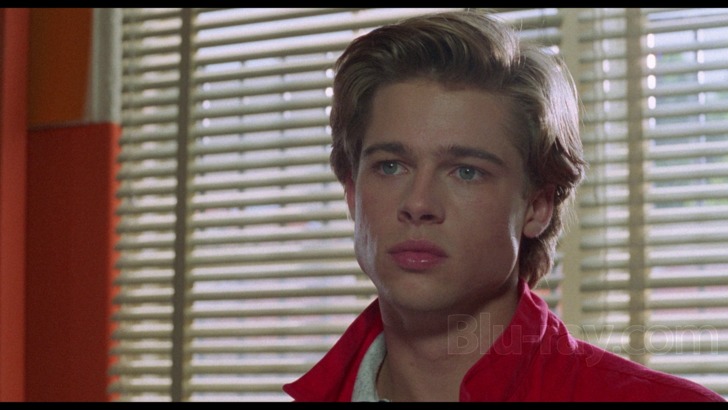 Someone is murdering the students and the teachers at the local high school and it’s up to Paula Carson (Jill Schoelen), the studious daughter of the local DA (Martin Mull), to figure out who is responsible!

Though the principal (Roddy McDowall) is a perv and the janitor (Robert Glaudini) fancies himself as being some sort of bizarre ninja with a mop, it soon becomes apparent that there’s really only two viable suspects. One of them is Brian Woods (Donavon Leitch), who has just returned home after spending several months in a mental hospital where he was regularly given electroshock therapy. The other is Dwight Ingalls (Brad Pitt), the alcoholic jock who is under tremendous pressure to win a basketball scholarship and who also happens to be Paula’s boyfriend! Brian and Dwight were friends when there were younger. Now, Dwight spends all of his time bullying Brian and Brian spends all of his time staring at Paula. Who could the murderer be!?

Actually, you won’t be surprised at all when the identity of the murderer is revealed. You’ve probably already guessed who the killer is. A campy slasher film from 1989, Cutting Class doesn’t exactly win any points for originality. If Cutting Class is remembered for anything, it’s for providing Brad Pitt with an early leading role. Pitt, it should be said, is totally convincing as Dwight. On the one hand, he’s such a jerk that it’s difficult to really like him but, on the other hand, he looks like Brad Pitt so you totally can’t blame Paula for putting up with him. For that matter, both Leitch and Schoelen give convincing performances as well. When you’ve got a trio as talented as these three, it’s kind of a shame that Cutting Class wasn’t a better film.

Cutting Class tries to mix horror and comedy but the comedy is too broad (Roddy McDowall leers like a cartoon wolf) while the horror is not quite horrific enough and, as such, the film never really settles on a consistent or an interesting tone. Whenever the film starts to get into a horror grove, Martin Mull shows up like a character in an overplayed Saturday Night Live skit. Whenever the film starts to find itself as a comedy, someone is horribly murdered and you’re totally taken out of the mood. This is also another one of those films where the characters randomly switch from being ludicrously stupid to unnaturally intelligent from scene-to-scene. The killer, for instance, is diabolically clever until the film’s final moments, at which point the murderer suddenly gets very talky and very easily fooled.

Cutting Class is occasionally interesting as a time capsule. It’s from 1989, after all. And it’s interesting to see Brad Pitt playing the type of character one would more likely expect to see on a very special episode of Saved By The Bell. Otherwise, this one is fairly forgettable.