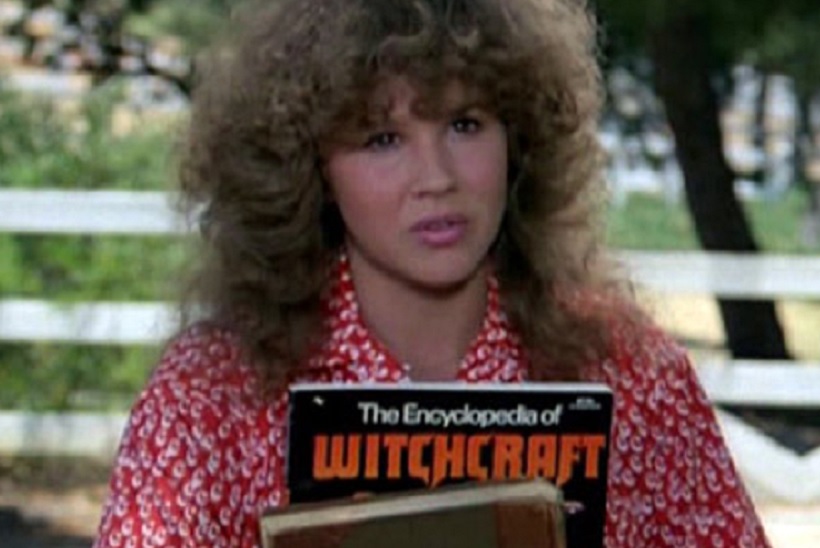 In this made-for-TV movie from 1978, Linda Blair (fresh from the first two Exorcist films) plays Rachel. Rachel is a teenager who lives on a ranch in California. She loves horses and she loves her boyfriend and she’s especially happy that her cousin, Julia (Lee Purcell) is coming to live with her. Julia recently lost both of her parents in a tragic auto accident. Though neither Rachel nor her parents have ever met Julia before, they’re all planning on welcoming her into their home.

The only problem is that, once Julia arrives, she seems to be a little bit strange. She speaks with a strange accent that no one on the ranch has ever heard before. The horses all seems to be terrified of her. After Rachel discovers that Julia has stolen minor personal possessions from her new family, Rachel starts to suspect that Julia might be witch and that she might be casting spells! Of course, by this point, Julia is no longer as shy and awkward as she seemed when she first showed up. Instead, she’s now glamorous and every man who meets her becomes intrigued, including Rachel’s boyfriend!

Based on a best-selling novel, Summer of Fear originally aired on NBC. If it were made today, it would probably air on something like Lifetime and it would have a title like, “Deadly Spell” or “Dangerous Seductress.” Seen today, it’s a bit of a slow movie and Linda Blair occasionally seems to be trying too hard to come across as being wide-eyed and innocent in her role but it’s entertaining as long as Lee Purcell is giving people strange looks and chewing up the scenery. The more out-of-control Pucell becomes, the more entertaining the film. Summer of Fear does build to a satisfying conclusion but it’s still hard not to wish that the story itself had moved just a bit quicker. In the end, probably the most interesting thing about Summer of Fear is that it was an early credit for horror master, Wes Craven. This was his third film and his first “major” production, one that he made in order to show that, after directing two independent films, he could be trusted with a mainstream, studio production.

Ultimately. the film’s a bit too slowly paced to really be successful but if you’re a fan of Wes Craven’s or even Linda Blair’s, you’ll probably want to watch it at least once.