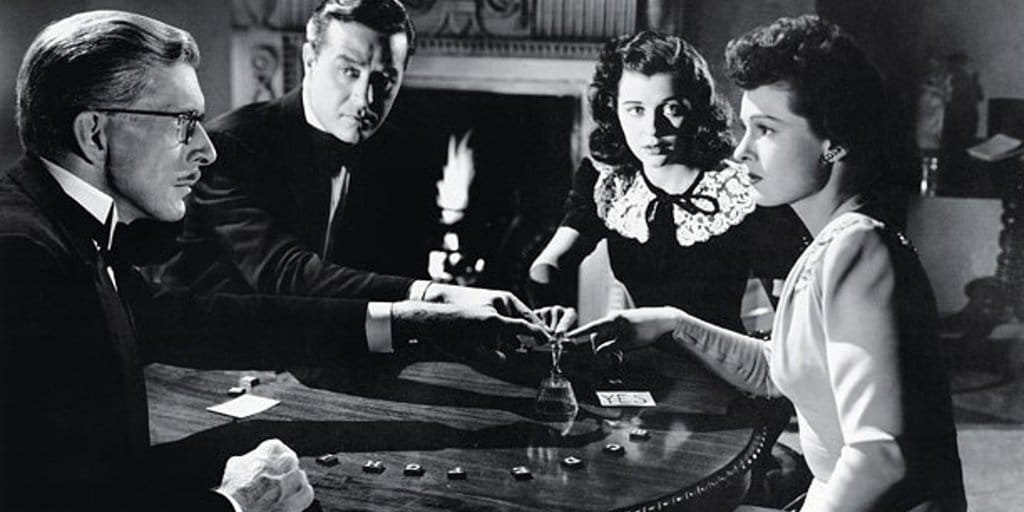 The Uninvited tells the story of Rick Fitzgerland (Ray Milland) and his sister, Pamela (Ruth Hussey).  They’ve just purchased a long-empty seaside house and, incredibly, they were able to get it at an amazingly low cost!  The house’s owner, the frail Commander Beech (Donald Crisp, alternating between being menacing and sympathetic), was apparently desperate to get rid of it.

Far less happy about the selling of the house is Beech’s granddaughter, the mysterious Stella (Gail Russell).  As Stella explains it, she grew up in the house, her mother died in the house, and Stella is still attached to the house.  Beech has ordered Stella to stay away from the house but, with Rick falling in love with her, Stella is soon visiting on a regular basis.

Of course, Stella isn’t the only unexpected visitor that the Fitzgeralds get to know.  It quickly becomes obvious that there’s something strange about the house.  Rick and Pamela discover an artist’s studio that is always cold.  They both hear the sound of a woman crying.  Beech claims that it’s nothing to worry about.  Old house make weird noises, he informs them.  However, Rick and Pamela start to become convinced that the house is haunted.

Stella not only agrees that the house is haunted but she also informs them that she knows the identity of the ghost.  It’s Stella’s mother!  But if that’s true, why does the ghost constantly seem to be encouraging Stella to put her life at risk?  Why does Stella go into a trance and, much as her mother did 16 years earlier, attempt to jump over the side of a cliff?

Is Stella’s mother trying to manipulate her daughter into joining her in death?  Or is there something even more sinister happening?

Well-acted and perfectly paced, The Uninvited is an effectively creepy film, one that remains memorable even 72 years after it was initially released.  Visually, The Uninvited resembles a film noir and, if not for a brief scene towards the end of the film, viewers would be justified in wondering if the house really is haunted or if everyone in the film is just letting the isolation and the shadowy atmosphere get to them.  It’s that hint of ambiguity that elevates The Uninvited and makes it a truly thought-provoking haunted house story.