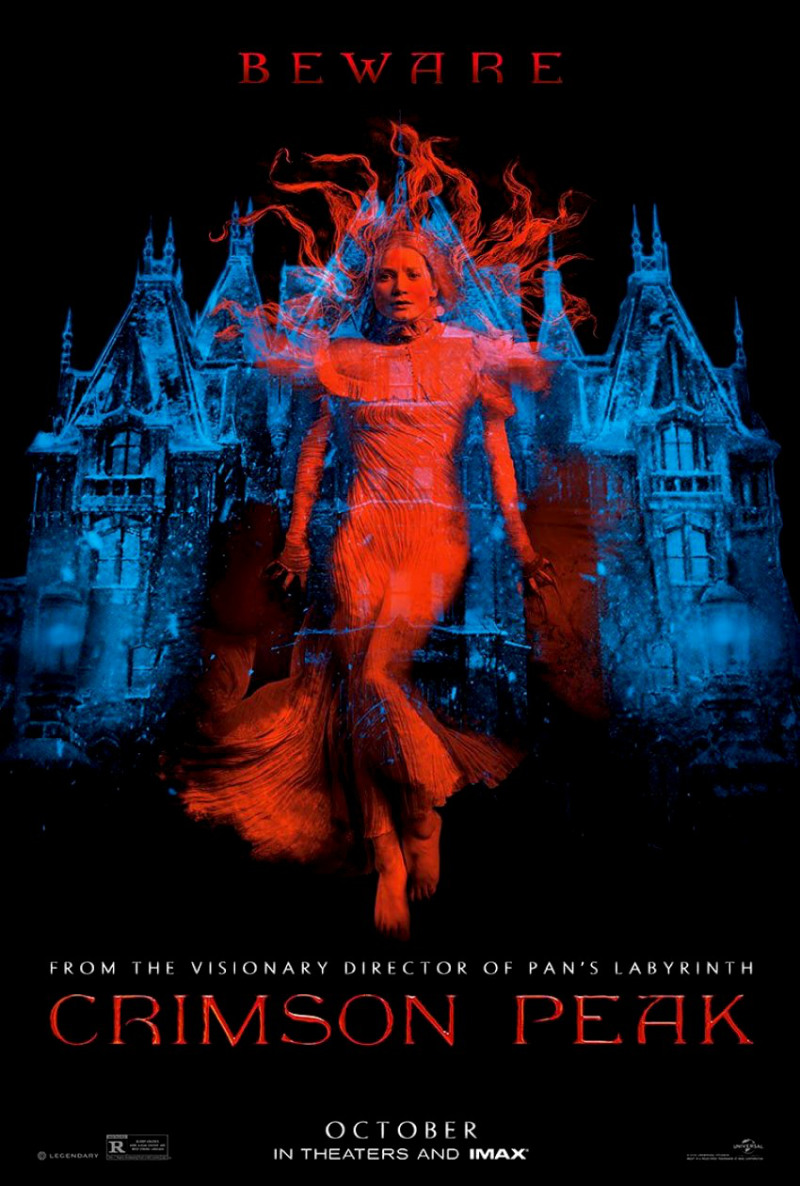 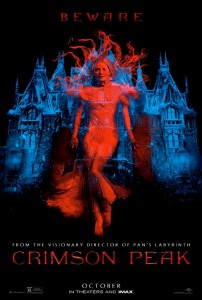 The fact that Crimson Peak, Guillermo Del Toro’s wonderful new film, is only getting mixed or grudgingly positive reviews tells you everything that you need to know about the sorry state of modern film criticism.

Taking place at the turn of the 19th Century, Crimson Peak tells the story of Edith Cushing (Mia Wasikowska).  The daughter of industrialist Carter Cushing (Jim Beaver), Edith is haunted by a childhood memory, in which her mother’s ghost appeared to her and told her to never go to Crimson Peak.  Edith grows up to be an aspiring writer.  She writes stories about ghosts, though she is always quick to point out that the ghosts are just meant to be a “metaphor for the past.”  Her publishers tell her that no one wants to read a ghost story written by a woman and they recommend that she concentrate on writing a nice romance.

Following the violent death of her father, Edith marries the charming inventor Sir Thomas Sharpe (Tom Hiddleston) and moves to his family home in England.  Still in shock over the death of her father, Edith struggles to make things work in England.  Tom is nearly penniless and seems to be more interested in his inventions than with her.  (Not only did they not consummate the marriage during the honeymoon but Tom sleeps in a separate bedroom.)  Meanwhile, Tom’s older sister, Lucille (Jessica Chastain), does little to hide the disdain that she feels towards her new sister-in-law.

As for the house itself, it is on the verge of collapsing.  At one point, Tom mentions that, because of the red clay that sits underneath the mansion, their new home is sometimes called Crimson Peak.  If that wasn’t enough to panic Edith, she keeps seeing mysterious figures wandering through the halls.  Edith swears that she is seeing ghosts and that they are trying to tell her something.  Tom and Lucille tells her that she’s imagining things and continue to insist that she drink a special tea.  Could that tea be the reason why Edith finds herself coughing up blood?

(Actually, there’s a lot of blood spilled over the course of Crimson Peak.  It’s not just the clay that makes the ground red.  If Edith Wharton had written a horror movie, the end result would probably be a lot like Crimson Peak.)

And let’s just get this out of the way right now — Crimson Peak is an absolutely brilliant movie.  Those critics who have complained that Crimson Peak doesn’t have any of the expected “shock” scares are totally missing the point.  Crimson Peak is not about cheap scares.  Del Toro is not looking to make you jump by having a cat jump out of a closet.  Instead, Crimson Peak is all about atmosphere.  Del Toro maintains an atmosphere of consistent unease throughout the entire film.  The scares come less from what is shown and more from what is implied.  In that way, Crimson Peak pays homage to the great gothic horror films of the past.

Jessica Chastain is absolutely brilliant in Crimson Peak.  The role of Lucille is not one that demands a lot of subtlety and Chastain appears to be having a great time getting to play such a menacing character.  If anything, this is one of Chastain’s best performances.  (One need only consider how overly mannered Meryl Streep would have been in the role to realize just how great an actress Jessica Chastain truly is.)  Mia Wasikowska is the epitome of fragile loveliness as Edith and Tom Hiddleston is perfectly cast as a handsome, slightly decadent aristocrat with a secret.  In fact, all three of them are perfectly cast.  Taking their roles too seriously would have been a mistake but so would have not taking the movie seriously enough.  The entire cast strikes a perfect balance, embracing the melodrama without going too far over the top.

So, why are so many film critics having such a hard time embracing Crimson Peak?  It’s pretty much for the same reason that a lot of them had a hard time with Pacific Rim.  Guillermo Del Toro’s films are masterpieces of the pulp imagination.  As such, he exposes the condescending attitude that most contemporary critics take towards “genre” films.  When mainstream critics dismiss Crimson Peak as just being “a horror film that isn’t scary enough,” all they’re really doing is revealing how ignorant they are of the horror genre.

So, in other words, don’t listen to those mainstream critics.  They are not worth your trouble.  Crimson Peak is a wonderfully acted and visually gorgeous gothic romance and it needs to be seen on the big screen.

Reportedly, Crimson Peak struggled at the box office this weekend.

Well, you know what?

If you haven’t seen Crimson Peak, you need to go out and see it this week.  It’s a great film and what good are we if we let the great ones go unseen?