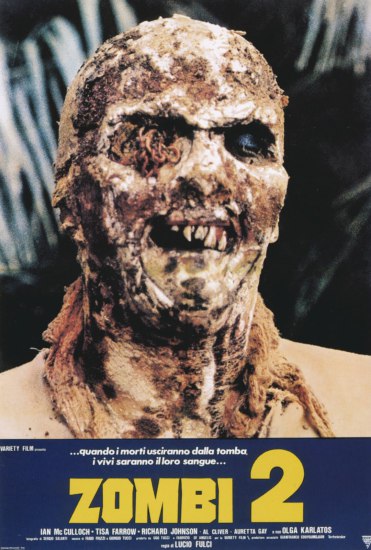 1) Do you love Zombie movies?

First off, a few words about that title.  Zombi was the Italian title for George Romero’s Dawn of the Dead.  Zombi was a huge hit on Italy and, in that shameless way that is beloved by all Italian horror fans, producers Fabrizio De Angelis and Ugo Tucci decided to take advantage of Zombi‘s success by naming their upcoming zombie film Zombi 2.  And, while I have always liked to think of Zombi 2 as being a prequel to Romero’s Dead trilogy, Zombi 2 is actually in no way related to Dawn of the Dead.

Opening with a previously dead body being shot in the head as it slowly sits up on a stretcher and ending with a haunting vision of apocalypse, Zombi 2 is coated in a palpable atmosphere of doom.  A boat floats into a New York harbor and the two cops who investigate are greeted by a lumbering and hungry corpse.  Tisa Farrow plays the daughter of the boat’s owner.  When she and a reporter (Ian McCulloch, giving a likable and bemused performance that often finds him playing straight man to a bunch of decaying corpses and which provides a nice run up for his openly subversive performance in Zombie Holocaust) team up to find her father, their investigation leads them to an isolated island where the haunted and alcoholic Dr. Menard (Richard Johnson, bringing so much gravity and self-loathing to his role that he literally elevates the entire film) is struggling to deal with an outbreak of zombies.  Along with a boat captain (Al Cliver) and his girlfriend (Auretta Gay), McCulloch and Farrow try to escape the island before they end up joining the ranks of the undead…

As a director, Lucio Fulci was known for bringing his own unique visual flair to the horror genre.  Fulci, perhaps more than any of the other great Italian horror directors working during the Italian horror boom of the 80s and 90s, literally brought nightmares to cinematic life.  As a result, Zombi 2 is probably one of the most visually memorable zombie films ever made.  From the minute that McCulloch, Farrow, Cliver, and Gay arrive on the island, you can literally feel the oppressively hot wind and dusty wind that blows through every scene.  When the dead walk across the desolate landscape, Fulci emphasizes the decayed state of these zombies, forcing the audience to consider just how fragile the human body truly is.  The fact that the undead manage to be so pathetic and so dangerous at the same time only serves to make them all the more frightening.  When a group of conquistadors come back to life, Fulci films it from their point of view and, for a few minutes, we literally are one of the undead, clawing our way out of a grave.  Needless to say, Fulci doesn’t shy away from the gore of a zombie apocalypse either.  His zombies are ravenous and destructive.  The Walking Deadmay be bloody but it’s got nothing on Zombi 2.

Along with the conquistador scene, Zombi 2 is especially remembered for two scenes, both of which showcase the best of both Fulci and Italian horror.

One is the scene where Dr. Menard’s wife (Olga Karlatos) is menaced by zombies after taking a shower.  Even after she slams the bathroom door, a zombies hand breaks through the door and grabs her by the hair and starts to pull her through the jagged hole in the door.  As she is slowly pulled to her doom, her eyeball is pierced by a splinter of wood.  It’s definitely an over-the-top moment, the type of thing that we expect from an Italian horror film.  But, as over-the-top as it may be, it’s also incredibly effective and terrifying.  It’s a scene that lets us know that there is no escape from our fate.  It’s a scene that reminds us that the zombies will always win because there is no way to lock out death.

(In fact, it’s such an iconic scene that almost all of Fulci’s subsequent films would feature a character losing an eye.  Adding a certain poignancy to his trademark scenes of ocular destruction was the fact that Fulci, himself, was diabetic and reportedly often feared that he would lose his eyesight.) 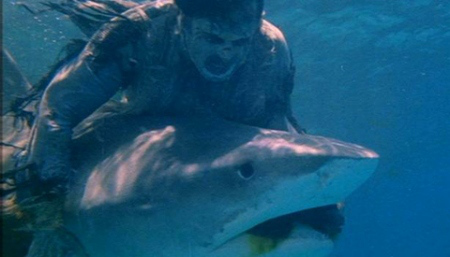 The other is a scene that always seems to bring a smile to the face of anyone who see it. That’s the scene where a zombie gets into a fight with a shark while Auretta Gay swims nearby.  Again, it’s a bit ludicrous but it’s also incredibly effective.  If nothing else, it invites us to wonder how — if a shark can’t beat a zombie — can there be any hope for humanity?

The answer, of course, is that there isn’t.  Ultimately, in the world of Fulci’s film, whether by causes natural or unnatural, we’re all destined to become one of the zombies. 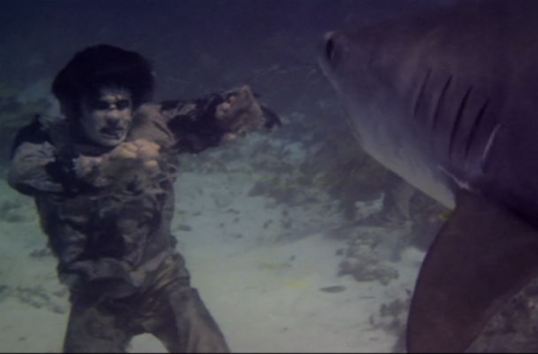