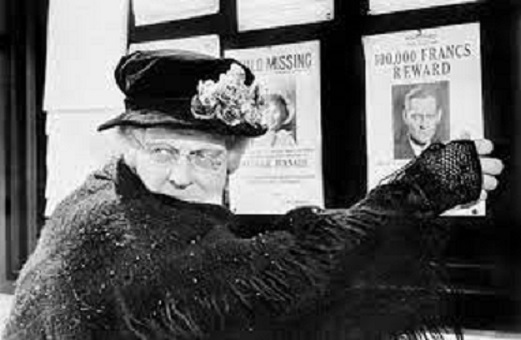 Paul Lavond (Lionel Barrymore) was just your ordinary Parisian bank owner until he was wrongly convicted of robbery and murder.  Sentenced to Devil’s Island and estranged from his beloved daughter, Lorraine (Maureen O’Sullivan), Paul spends 16 years plotting how to clear his name and progressively growing more bitter and angry.

He also befriends a scientist named Marcel (Henry B. Walthall).  Marcel has figured out the formula for shrinking people.  He’s convinced that shrunken people will eat less, use less fossil fuels, and take up a lot less space on the planet.  They’ll probably also be less likely to wage war on each other.  That’s right — the secret to world peace is shrinking the population.

However, Paul has other plans for that shrinking formula!  What better way to clear his name and seek revenge than by using a shrunken army of henchmen?

Uhmmm — okay, it sounds a little bit overcomplicated to me but who am I to doubt the wisdom of Lionel Barrymore?

Anyway, Paul and Marcel escape from Devil’s Island but Marcel dies shortly afterward.  Paul, however, forms a partnership with Marcel’s widow, Maleta (Rafaela Ottiano).  Disguising himself as an elderly woman, Paul returns to Paris.  Not only does he use his disguise to watch over his daughter (who doesn’t realize that the kindly old woman is actually her father) but he also starts to develop quite a reputation for selling incredibly realistic dolls…

First released in 1936, The Devil-Doll is an odd little mix of comedy and melodrama and, to be honest, it’s a bit too uneven to really work.  That said, the film is definitely worth watching just for Lionel Barrymore’s enjoyably eccentric performance.  (Classic film lovers will immediately notice that, when in disguise, Lionel greatly resembles his sister, Ethel.)  This Christmas, when I’m watching It’s A Wonderful Life for the 100th time and Mr. Potter is cackling and plotting to put the Bailey Building and Loan out of business, I’ll have a hard time not thinking about The Devil-Doll.

The Devil-Doll was one of the final films to be directed by the legendary horror specialist, Tod Browning.  I’ve read that Browning’s later films suffered because Browning plunged into depression after the death of Lon Chaney, Sr. and he never quite recovered.  And, really, The Devil-Doll feels like a film that would have been perfect for Chaney’s unique talent.

But, that said, Lionel Barrymore appears to be having a lot of fun as Paul and his performance is the main reason to watch the film today.