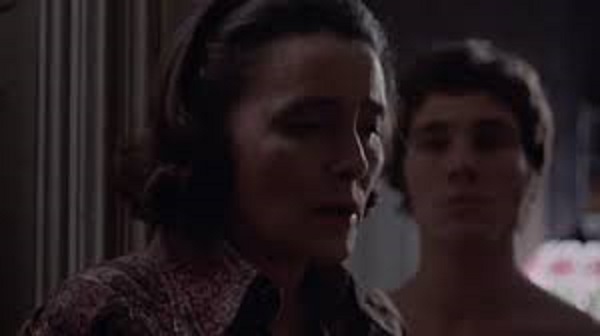 The 1971 British film, The Night Digger, revolves around three people.

Maura Prince (Patricia Neal) lives in a dilapidated mansion out of London. She has never married and spends almost all of her time taking care of her blind mother, Edith (Pamela Brown). Edith goes out of her way to make sure that Maura will never have the courage to leave her and find happiness on her own. However, with the mansion falling apart around them, it’s becoming obvious that Maura cannot take care of the entire place on her own. That’s when a mysterious but handsome man named Billy Jarvis (Nichols Clay) rides up on his motorcycle and asks if the women need a handyman.

Billy has a dramatic story about his past, claiming that he lost almost everything that he owned as the result of a fire in a barn, one which also led to the death of his mother. Billy is charming and handsome and he ride a really impressive motorcycle and he looks good in a leather jacket. You certainly can’t blame Maura for starting to fall in love with him. Nor can you blame Edith for wanting to have an athletic young man around as there have been stories about a madman who stalks the night, killing women. The Traveling Maniac, some have taken to calling him. Complicating the matter, though, is the fact that Billy just happens to be The Traveling Maniac. With Maura falling in love with him, will she discover the truth or will she become his next victim?

The Night Digger took me by surprise. I wasn’t expecting much from this film when I watched it earlier today but it turned out to be rather clever and suspenseful thriller, one that told its story with a good combination of black humor and emotional honesty. Atmospherically directed by Alistair Reid and featuring a trio of excellent lead performances, The Night Digger was compelling compelling thriller, a gothic horror story with a great ending. This is definitely one to keep an eye out for!