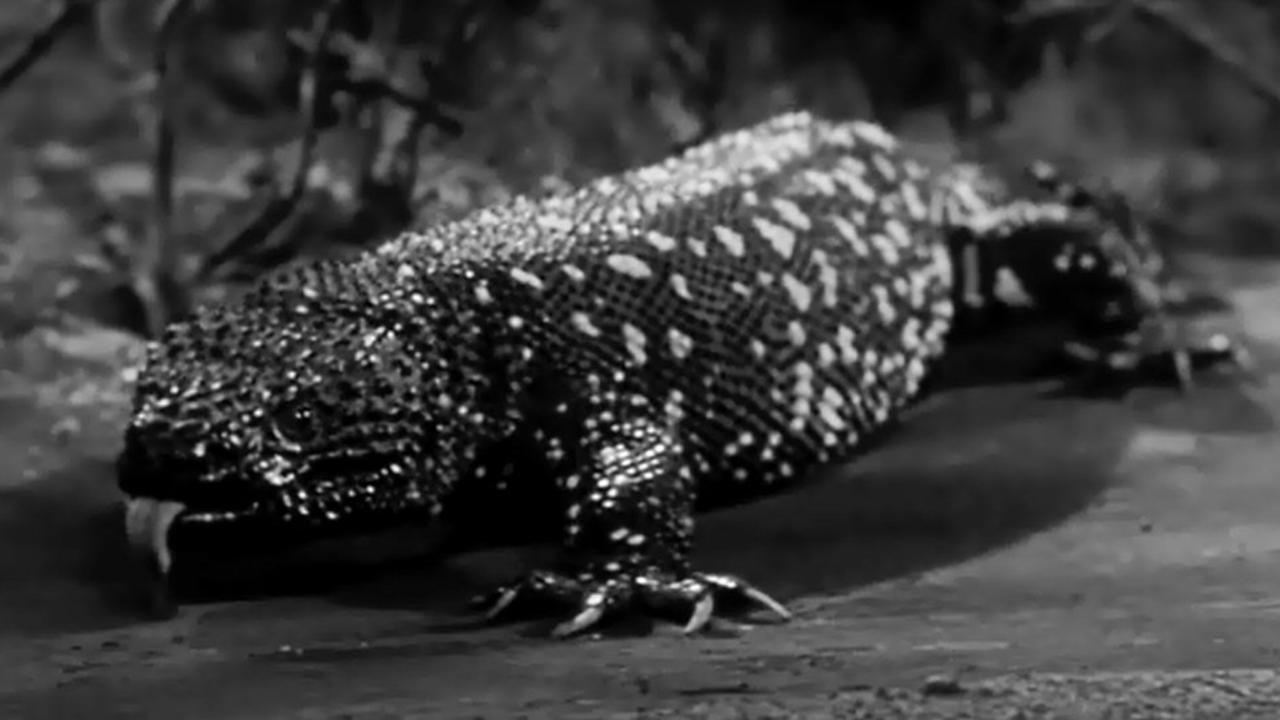 The 1959 film, The Giant Gila Monster, takes place in a small Texas town, where everyone’s either a drunk, a law enforcement officer, or a teenager who wants to go the sock hop. In fact, the teens are so enthused about the sock hop that it takes them a while to notice that two of their friends are missing! What happened to Pat and Liz!?

Well, as we already know what happened because we saw it at the start of the film! Pat and Liz were parked at the ravine, making out in Pat’s car, when they fell victim to a giant Gila monster! Though, if we’re going to be honest …. the monster actually isn’t really a Gila monster. It’s just a really big lizard that was filmed wandering over around a miniature set. It moves very slowly and it sticks out its tongue at the camera. It’s a nice looking lizard but it’s no Gila monster. No matter, though! What’s important is that it’s big, it’s dangerous, and it’s making its way towards the town!

Anyway, the teens eventually figure out that their friends have disappeared and they try to appeal to the town’s useless sheriff to help them find them. The sheriff doesn’t really seem to care though. He’s got an entire town of drunks to deal with. So, it looks like the teens are going to have to save the town themselves!

The Giant Gila Monster is a pretty silly film. It’s a little over 70 minutes long and it’s obvious that the majority of the budget was spent on the cars that the various teenagers drive. It was an independent production, made to be sold to drive-ins around the South. Teenagers in 1959 probably watched the film and honked their car horns whenever the monster showed up. The script is bad, the actors are bad, the direction is bad, but you know what isn’t bad? The fake Gila Monster is actually kind of cute. I mean, we’re told that we shouldn’t like it and that it’s responsible for killing a lot of people but who cares? Whenever it shows up, slowly lumbering its way across the countryside, it’s hard not to admire the determination of the Gila Monster. Though the actors often seem to be confused by their dialogue, the lizard is obviously having the time of its life. Go, Lizard, go!

The Giant Gila Monster is one of those independent 50s monster movies that are pretty much impossible to resist. To its credit, the film does have a sense of humor about itself. It is meant to be a comedy, though most of the laughs are unintentional. And, as I said before, vintage car lovers will enjoy seeing some of the roadsters that pop up in this film. Even with all the classic cars, though, the big lizard in the main attraction. It walks around the miniature desert set as if it owns the place. The star is the monster and that’s really the way things should be.