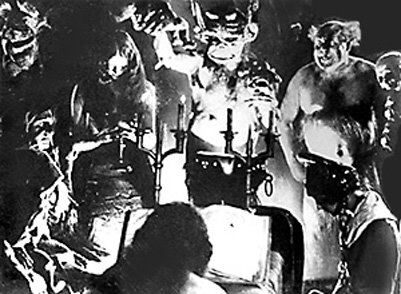 It’s always interesting to watch Haxan with someone who has never seen it before.

Because this Swedish film was made in 1920 and released in 1922, it’s a silent film.  Because it’s sold as being a documentary, it can be a bit of a hard sell among people who 1) hate to read subtitles and 2) instantly recoil at the idea of watching anything might be a educational.  Even the fact that the film is subtitled “Witchcraft Through The Ages” might not be enough to get some people to set aside their prejudices.

So, what you do is you beg.  You offer to give them popcorn and a Coke if they watch the movie.  You stretch out on the couch, arch an eyebrow and suggest that there might be another reward waiting for them at the end of the film.  You do whatever you have to do and you get them to watch.

Now admittedly, the first part of Haxan does come across as being a bit slow.  The intertitles, which explain that this film was made to examine witchcraft throughout the ages, can come across as being a bit dry.  The numerous scenes about how people used to think that the universe revolved around the Earth and that stars were merely lights hanging in the sky goes on for quite some time.  Personally, I like these scenes.  I enjoy the fact that director Benjamin Christensen actually uses a pointer, as if he’s a lecturer at a university.  But they’re not for everyone.

Because eventually, the film moves on from discussing ancient and medieval astronomy and it starts to discussing why people used to believe in witches and how witchcraft used to be punished and suddenly …. OH MY GOD, IS THAT THE DEVIL BURSTING UP OUT OF NOWHERE!?  Yes, it is.  And yes, that woman is buying a love potion and that monk has become possessed and that witch is flying through the air!

Haxan is an interestingly constructed film.  At the start of the film, it proudly declares itself to be the work of a skeptic.  Haxan is a film that, in its own scholarly way, ridicules superstition.  Those who once believed in witchcraft are compared to those who once believed that the world was flat and that the stars revolved around the Earth.  And yet, the film’s greatest moments are the ones that feature scenes of witches and the devil.  I don’t think this is accidental.  Instead, I think that Benjamin Christensen understood what D.W. Griffith, Ceceil B. DeMille, and Roger Corman understood.  Audiences may want to pat themselves on the back for being pure or rational or whatever but, at the same time, they also want that taste of sin and the indulgence of superstition.  Haxan makes the argument for science but not before indulging in some old time religion.

And it’s a lot of fun.  Haxan is such a visually striking film with it’s taunting devils and its flying witches that one can hardly be shocked that it was initially banned in many countries and, even when it was released, it was often in a heavily censored form.  Watching the film, you can also understand why it influenced future horror directors.  The images are frequently the stuff of nightmares and the fact that the images are silent just makes them all the more ominous.

Haxan is definitely a film that every horror fan needs to see.  Luckily, there’s a Criterion edition for that!  Oh Criterion.  What would we do without you?