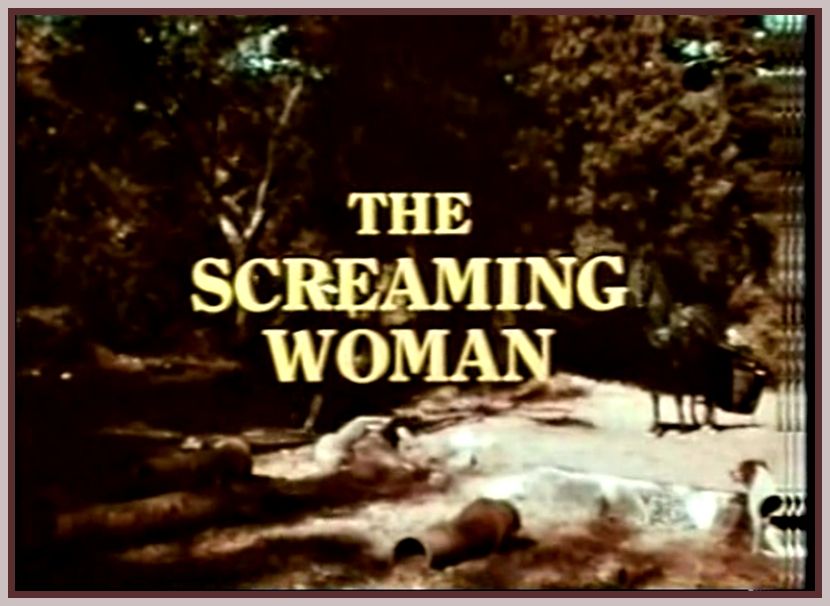 Take for instance, The Screaming Woman….

In this made-for-tv movie from 1972, the great Olivia de Havilland plays Laura Wynant. Laura is a wealthy woman who has just been released from a mental institution. She goes to her country estate to recuperate but, as soon as she arrives, she starts to hear a woman’s voice in the back yard.

Laura looks around and soon realizes that the voice is coming from the ground! A woman has been buried alive in the backyard and will soon die if not rescued! At first Laura tries to dig up the woman on her own but her hands are crippled by arthritis. An attempt to get a neighborhood child to help her dig just leads to Laura being confined to her home, under doctor’s orders. No matter how much Laura tries to get the people around her to listen for the sound of the woman crying for help, everyone just assume that Laura must be imagining things.

Further complicating things is the fact that the person who put the woman in the ground is still out there. And, when he discovers that Laura has been hearing voices, he decides that maybe he needs to do something about both Laura and the screaming woman….

The Screaming Woman is an effective psychological thriller and, considering that it was made for early 70s network television, surprisingly suspenseful. If the film were remade today, I imagine it would try to keep us guessing as to whether or not Laura was hearing an actual woman or if it was all in her mind. But no matter! By revealing early on that Laura actually is hearing what she thinks she’s hearing, The Screaming Woman puts us right into Laura’s shoes and we share her frustration as she desperately tries to get someone — anyone — to take her seriously. It helps that Laura is played by Olivia de Havilland, who gives a very sympathetic and believable performance. De Havilland, who started her career appearing in Errol Flynn movies back in the 30s and who most famously played Melanie in Gone With The Wind, is still with us. As of this writing, she is 103 and living in Paris.

The film is based on a short story by Ray Bradbury. In the story, it’s a little girl — as opposed to an old woman — who hears the voice. I haven’t read the short story so I don’t know how else it compares to this adaptation but, as a film, The Screaming Woman is an entertaining and creepy thriller.