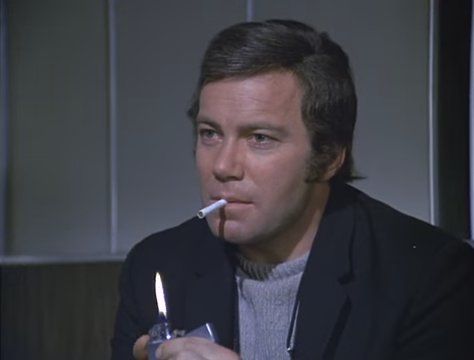 I imagine that it should go without saying that, if you’re on an airplane and you’re flying high above the ground, the last thing that you want to deal with is a bunch of angry ghost druids.

And yet, that’s exactly what happens in this made-for-TV horror film from 1973.

The ghost druids are upset because two architects (played by Roy Thinnes and Jane Merrow) have traveled to England, specifically so that they can supervise the deconstruction of ancient druid altar. Now, they’re flying the pieces of the altar back over the ocean so that the altar can be reconstructed in the United States. The spirits of the ancient druids aren’t happy about being moved so they start doing everything they can to make the journey difficult.

First, they attempt to freeze the plane. When that doesn’t work, they decide to rip it in half. One of the passengers, Mrs. Pinder (Tammy Grimes), suggests that maybe the druids will settle down if they’re offered a sacrifice. When the druids reject an offer of a doll, the passengers start to wonder if maybe the spirits would be happier with a human sacrifice.

Although some of the passengers are reluctant to buy into the whole sacrifice thing, a few of them do start to come around. For instance, there’s a perpetually angry businessman who is played by Buddy Ebsen. Once he realizes that the druids aren’t going anywhere, he has no problem with the idea of a human sacrifice. There’s also a cowboy played by Will Hutchins. If sacrificing a human is what he has to do to have another chance to ride the range, that’s what he’s going to do. Paul Winfield plays a distinguished doctor who tries to keep everyone calm while Chuck Connors is stuck in the cockpit, trying to keep the plane in the air while his passengers and crew debate the ethics of human sacrifice.

And then there’s William Shatner.

Shatner plays a former priest who has lost his faith. From the minute he gets on the plane, he starts drinking and he doesn’t stop for almost the entire movie. It doesn’t matter what’s happening on the plane, Shatner always has a glass in his hand. Playing a character who never has anything positive to say, Shatner smirks through the entire film. Shatner delivers all of his lines in his standard halfting and overdramatic fashion and it’s something of a wonder to behold. Shatner has said that The Horror At 37,000 Feet may be the worst movie in which he ever appeared and just one look at his filmography will show why this is such a bold statement.

The Horror at 37,000 Feet is definitely a film of its time. The plane comes complete with a swinging cocktail lounge, William Shatner wears a turtle neck, and all of the flight attendants wear boots and miniskirts. Everything about this film screams 1973. It’s an incredibly silly but undeniably fun movie. With a running time of only 73 minutes, the pace is fast and the druids don’t waste any time getting down to business. The film’s on YouTube so check it out the next time you’ve an hour and 13 minutes to kill.