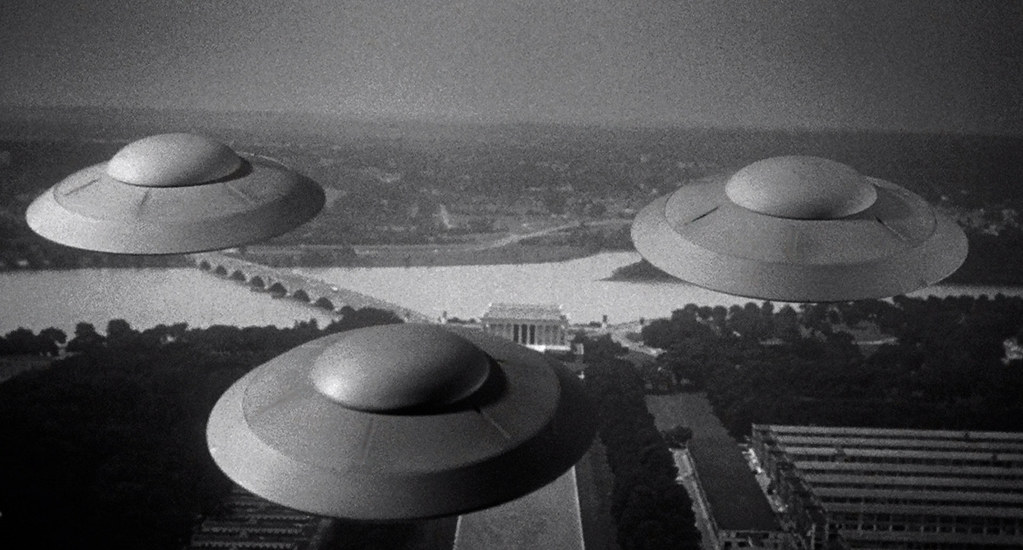 In 1956’s Earth vs. The Flying Saucers, the aliens have finally decided that it’s time to land their ships and meet with the Earthlings. Believe it or not, the aliens are coming in peace. They even send a coded message down to Dr. Russell Marvin (High Marlowe) as he’s driving through the desert with his wife, Carol (Joan Taylor).

Unfortunately, that turns out to be a mistake because Russell totally fails to decipher the message. The flying saucers land at a local military base and, instead of being greeted in peace, they’re fired upon by a bunch of soldiers. After the aliens vaporize most of the soldiers, they kidnap Russell’s father-in-law (Morris Ankrum) and they send out another message. The citizens of Earth have 56 days to negotiate a surrender or the planet will be destroyed!

It’s now falls to Russell to not only figure out a way to defeat a superior invading force but to also build the weapon that will save Earth. And really, seeing as how this is all his fault, that’s the least that Russell could do.

Despite the campy name and the low-budget, Earth vs. The Flying Saucers actually takes itself fairly seriously. This movie was made at the start of the big UFO boom, when newspapers were still full of stories about people claiming that they had spotted something strange in the air. The legendary Ray Harryhausen based his UFO designs on actual reports of what people claimed that they had seen in the sky. As a result, this is the film that, for many, first solidified the idea of what a flying saucer should look like.

One of the most interesting things about this film is that the aliens, themselves, are rather reasonable. Oh sure, they end up killing a lot of people and trying to destroy the planet but really, it’s all just a big misunderstanding. The aliens came in peace and, even after they get mad, they still give humanity time to negotiate a surrender. Of course, that being said, we still have to blow them out of the sky because they are trying to conquer the world and, as always seemed to happen in 50s sci-fi films, it’s pretty much up to America to do all the work.

Though director Fred Sears keeps the action moving quickly and both Marlowe and Ankrum give good performances in their stock roles as, respectively, the scientist and the military leader, Ray Harryhausen is the real star of this movie. The stop-motion animation special effects are still a lot of fun to watch today. Plus, if you don’t applaud when that flying saucer crashes into the Capitol dome, there may be no hope for you.

Earth vs. The Flying Saucers is one of the better alien invasion films of the 50s. If nothing else, it’s a film that will inspire you to keep watching the skies!