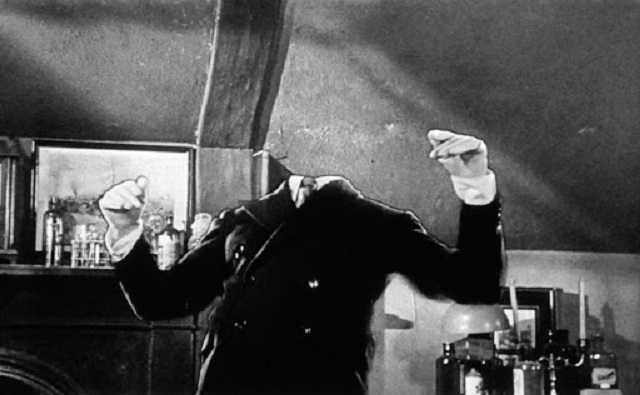 The 1933 Universal horror film, The Invisible Man, never seems to get as much attention as Frankenstein, Dracula, The Wolf Man, or The Mummy and it’s also been somewhat overshadowed by the more recent remake. Perhaps it’s because the original invisible man really isn’t a supernatural monster.  He’s just a scientist who has turned himself invisible and is now going mad as a result.  Or maybe it’s because there have been so many crappy films that have used invisibility as a plot point that the reputation of the original Invisible Man suffers by association.

For whatever reason, The Invisible Man never seems to get spoken about in the same breathless, gleeful manner as some of the other Universal monsters.  But I have to admit that, though I usually can’t stand movies about invisibility, I rather like The Invisible Man.

Based on a novel by H.G. Wells, The Invisible Man opens with a mysterious man (played by Claude Rains) arriving in a small English village.  He checks into a small inn and soon, everyone in the village is scared of him.  It’s not just his haughty attitude or his habit of ranting about his own superiority.  There’s also the fact that he is literally covered, from head to toe, in bandages.  He always wears gloves and dark glasses.  He insists that he’s doing important research and demands to be left alone.

The inn keeper (Forrester Harvey) and his histrionic wife (Una O’Connor) put up with the mysterious man until he falls behind on his rent.  However, once confronted, the mysterious man announces that he’s not going anywhere.  When the police and a mob of villagers arrives, the man starts to laugh like a maniac.  He unwraps the bandages around his head and…

Well, there is something there.  It’s just that the man is invisible so no one can see what’s underneath.  It turns out that the man is Dr. Jack Griffin, a chemist who has been missing for several days.  He’s created an invisibility serum but he can’t figure out how to reverse the effects.  Even worse, the serum is driving him insane.  Griffin’s fiancée, Flora (Gloria Stuart), and her father, Dr. Cranley (Henry Travers), are searching for Jack but Jack doesn’t particularly want to be found.  Jack is more interested in exploring how he might be able to use invisibility to conquer the world…

The Invisible Man is historically important because it was the film that brought Claude Rains to Hollywood.  Rains has previously made films in the UK but this was his first American film.  Think of how different film history would have turned out if The Invisible Man had, as originally planned, starred Boris Karloff.  Without Claude Rains coming to America, who would have played Louis in Casablanca?  Who would have played Sen. Paine in Mr. Smith Goes To Washington or Alex Sebastian in Notorious?  Of course, we don’t really see Claude Rains’s face until the very end of The Invisible Man.  Instead, we just hear his voice but what a voice Claude had!  He delivers his dialogue with just the right amount of malicious sarcasm.

I like The Invisible Man.  For modern audiences, it’s not particularly scary.  (Though I do find the idea of being unknowingly followed by an invisible person to be a little unnerving…)  However, unlike a lot of other old horror films, you can watch The Invisible Man and see why it would have been scary to an audience seeing it for the very first time.  In 1933, a time when film was still a relatively new medium and audiences had yet to become jaded by special effects, here was a man unwrapping his bandages to reveal that there was nothing underneath!  That had to have freaked people out!

The Invisible Man was directed by James Whale and the film features the same demented sense of humor that distinguished The Bride of Frankenstein.  The villagers are portrayed as being so hysterical that you can’t help but think that maybe Griffin has a point about being surrounded by fools.  By the time the local constable declares, “What’s all this then?,” you can’t help but start to sympathize with Jack Griffin.

There’s been a lot of  bad invisibility movies made but The Invisible Man is not one of them.  It may not be as well remembered as some of the other Universal horrors but it’s definitely one worth seeing. 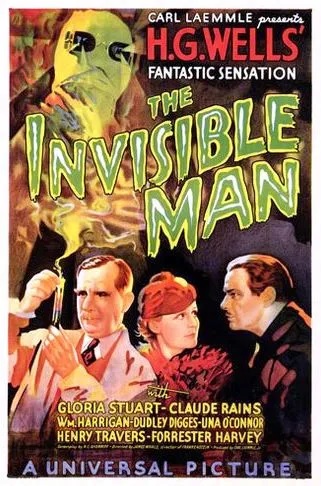