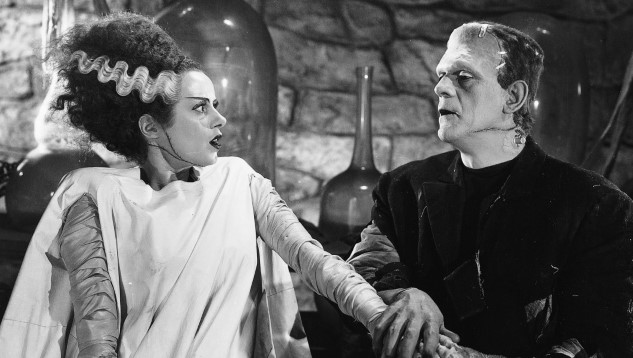 (Of course, in the original novel, the monster somehow learns how to speaks like an Oxford grad and Dr. Frankenstein destroys the female monster before bringing her to life.  The monster responds by killing Elizabeth.  Seriously, Frankenstein is a dark book.)

Bride of Frankenstein features one of my favorite openings of all time.  Lord Byron (Gavin Gordon) and Percy Bysshe Shelley (Douglas Walton) are praising Mary Shelley (Elsa Lanchester) and the story that she’s told about how a dedicated scientist played God and created life.  Mary informs them that she’s not finished and then proceeds to tell them the rest of the story.  It’s a great opening because it lets us know that the rest of what we’re seeing is taking place directly inside of Mary’s mind.  It frees the film from the constraints of realism and allows director James Whale to fully indulge his every whim, no matter how bizarre.  When you’re inside someone else’s imagination, anything can happen and that’s certainly the feeling that you get as you watch The Bride of Frankenstein.

The Bride of Frankenstein opens with that burning windmill and a wounded Henry Frankenstein (Colin Clive) being carried back to his wife, Elizabeth (Valerie Hobson, replacing Mae Clarke).  Gone is the original film’s coda, in which Elizabeth announces that she’s pregnant.  And why shouldn’t it be gone?  It felt awkward in the first movie and, like any good writer, Mary Shelley is fixing her story as she goes along.

While Henry is recovering, he is approached by a former mentor, Dr. Pretorious (Ernest Thesiger).  Dr. Pretorious is undoubtedly an eccentric and definitely a little bit crazy but he believes in Frankenstein’s work.  In fact, Dr. Pretorious has even created life on his own!  He’s created a bunch of tiny people that he keeps in several glass jars.  They’re impressive but, sadly, they’ll never conquer the world.  Pretorious wants Frankenstein to, once again, work with him to create life.  As Pretorious explains it, it’s time to usher in a new age of “God and monsters!”

(Interestingly enough, one of Pretorious’s henchmen is played by Dwight Frye, who previously played Frankenstein’s henchman, Fritz, in the first film.  Frye dies in both films.  Reportedly, Universal bestowed upon him the nickname, “The Man of a Thousand Deaths.”  It can perhaps be argued that Dwight Frye was both the Steve Buscemi and the Giovanni Lombardo Radice of Universal horror.)

Meanwhile, the monster (Boris Karloff, credited with just his last name because, just four years after Frankenstein and the Mummy, he was already an icon) has survived the burning windmill.  He’s lonely, he’s afraid, and he actually kills more people in The Bride of Frankenstein than he did in Frankenstein.  And yet, he’s still the film’s most sympathetic character.  With everyone constantly trying to kill him, you can understand why the monster is quick to attack every human being that he sees.  He’s almost like a dog who, after years of abuse, automatically growls and bears his teeth at anyone that he sees.

And yet, the monster does eventually find a friend.  A blind hermit (O.P. Heggie) invites the monster into his own home.  (Of course, the hermit does not know who the monster is.  He just assumes that monster is a normal man who does not know how to speak.)  As time passes, the hermit teaches the monster how to say a few words and also tells the monster that there is nothing worse than being lonely.  The monster learns that “Friend good.”  The monster even learns how to smoke a cigar and Heggie and Karloff play these roles with such warmth (Bride of Frankenstein is not only the film where the Monster learns to talk, it’s also the one where he learns to smile) that you really start to dread the inevitable scene where everything goes wrong.

And that scene does arrive.  Two hunters stop by the hermit’s shack and immediately attack the Monster.  The Monster flees.  The shack burns down.  The hermit is led away from his only friend, apparently destined to be lonely once again.

Eventually, of course, the Monster does get his bride.  The Bride is such an iconic character that it’s easy to forget that she only appears in the final ten minutes of the film.  Elsa Lanchester plays both Mary and the Bride.  She screams when she sees the Monster.  “We belong dead,” the Monster replies and my heart breaks a little every time.