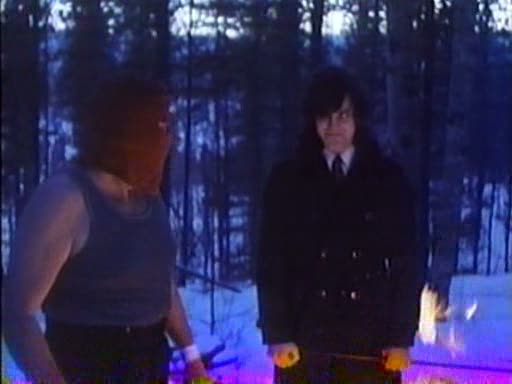 The 1990 film, The Final Sacrifice, opens in the snowy Canadian wilderness.  A man who I can only assume is a pro wrestler is hanging out with another man, who I can only assume is the lead singer for an emo band.  According to the film, the man in the suit is named Satoris (Shane Marceau) and he’s the leader of a cult.  All the other members of the cult wear a mask, even when they’re wandering about in broad daylight.  Why doesn’t Satoris wear a mask?  I’m not sure. This is Troy McGreggor (Christian Malcolm), a teenager who looks like a mash-up of Anthony Perkins and Roddy McDowall.  For some reason, seven years ago, Troy’s father was murdered by Satoris and the cult.  Troy’s father was an archaeologist who was searching for a lost city that apparently used to exist a few miles outside of Toronto.  Now, for reasons that are never exactly clear, the cult is after Troy.  In order to escape from the army of masked men who are after him, Troy runs into the wilderness of Canada.

He’s going to need help to survive!  Preferably help with a mullet and a denim jacket… This is Zap Rowsdower (Bruce J. Mitchell), whose name might as well just be Zap Canadian.  Zap not only rescues Troy from the cult but it also turns out that Zap is a former member!  It’s up to Zap and Troy to not only defeat Satoris’s evil plans but also to find this lost city.  It’s never quite clear what Satoris’s plan is, other than it involves taking over the world.  Speaking for myself, if Satoris can be defeated by a gawky teenager and an aging hockey fan, I really have to wonder if Satoris is actually as powerful as everyone assumes that he is. This is my favorite character in the entire film, Mike Pipper (Ron Anderson).  Mike used to know Troy’s father and lives in a cabin in the woods.  Mike has a grizzled old prospector’s voice, which makes it impossible to understand what he’s saying but he was still fun to listen to. Anyway, it’s not always easy to keep up with what exactly is going on with The Final Sacrifice.  The film’s low budget is obvious in every single shot and the poor sound quality often makes it difficult to keep track of what the characters are actually talking about.  The film has a sort of “make it up as you go along” feel to it.  Interestingly enough, that low budget is both the film’s biggest weakness and its great strength.  It may not be any good but you have to kind of respect the fact that a bunch of Canadian college students with no money still managed to make a movie.

The Final Sacrifice is one of those movies that works best if you watch it with a group of friends.  I watched it last night with the members of the Late Night Movie Gang and we had a blast trying to figure out just what exactly was supposed to be going on.