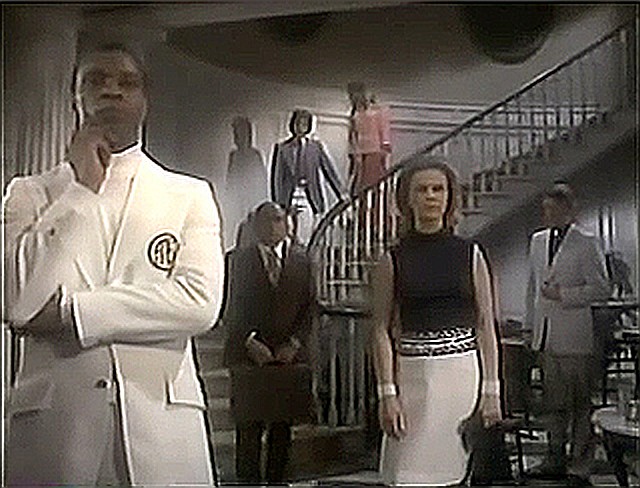 The 1972 made-for-TV movie Haunts of the Very Rich opens with a lengthy shot of Lyle (Tony Bill) and Laurie (Donna Mills) sharing a very long kiss.  Obviously, they’re very happy and why shouldn’t they be?  They’re young.  They’re beautiful.  They’re in love.  They’re newly married.  And … they’re on an airplane!

It’s a private plane, one that’s heading towards a resort called The Portals of Eden.  There’s only a few other people on the plane.  David Woodrough (Lloyd Bridges) is a businessman who is looking forward to spend some time away from his wife, especially if it means a chance to get to know one of the other passengers, Ellen Blunt (Cloris Leachman).  Annette Larner (Anne Francis) is also traveling alone and is hoping she might finally be able to get some sleep without having to take a handful of pills beforehand.  Rev. Fellows (Robert Reed) appears to have lost his faith.  And then there’s Al Hunsicker (Ed Asner).  Hunsicker’s a little bit confused about how he ended up on the airplane.  As far as he knows, he’s supposed to be on his way to a business meeting in Dallas.  Portals of Eden?  Al’s never heard of the place!  Of course, nobody on the plane really seems to be sure where they’re going or how they even got on the plane in the first place.  Strangely, Al appears to be the only one who finds any of this to be strange.

When the plane lands, they discover that the Portals of Eden is a large hotel sitting at the edge of a tropical wilderness.  Their host, the always polite Mr. Seacrist (Moses Gunn), welcomes them but avoids answering anyone’s questions.  Seacrist tells them to enjoy their stay.

For the first day, that’s exactly what everyone does.  They relax.  They indulge in a little pampering.  David gets to know Ellen.  Al is still worried about getting to his business meeting but he is assured that he can always fly out to Dallas the following day.

The night, a violent storm hits.  The next day, everyone wakes up to discover that the resort is nearly deserted.  There’s no electricity.  There’s no way to call out.  There’s not much food.  Seacrist tells them not to worry.  He assures them that help is on the way.  As the guests wait to be rescued, they finally start to wonder just how exactly the ended up at the resort in the first place.  They realize that they’ve almost all had a recent brush with death.  David swears to Ellen that he’ll file for divorce as soon as they get back home but what if they don’t have a home to which to return?  Occasionally, the guests hear a plane flying overhead.  At one point, they even see one land.  But every time, just when it seems like they’re on the verge of finally being rescued, the plane vanishes.

And things just get stranger from there.

If Jean-Paul Sartre had ended up in the United States, writing for The Bold and the Beautiful, the end result would probably look a lot like Haunts of the Very Rich.  Considering that this is a made-for-TV movie from the early 70s, Haunts of the Very Rich is a surprisingly effective and atmospheric little horror film.  The story itself won’t exactly win any points for originality.  You’ll guess the secret of Portals of Eden long before any of the characters in the film.  But still, it’s a well-directed and nicely acted film, one that’s topped off with a suitably surreal (if somewhat abrupt) finale.

Haunts of the Very Rich can currently be found on YouTube and I recommend it for anyone who likes their melodrama served with a side of existential dread.