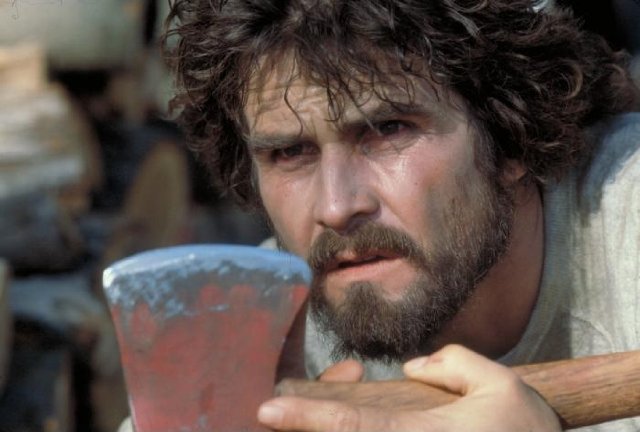 Based on a true story!

(Or maybe not.  Actually, probably not…)

This 1979 film tells the story of George and Kathy Lutz (James Brolin and Margot Kidder), a young married couple who move into a big house in Amityville, New York.  George and Kathy are having financial trouble so it’s good thing that they were able to find such a nice house at such a low price.  Of course, it’s possible that the house was cheap because it was built on a native burial ground.  Plus, the previous owners were murdered by their son, who later claimed that he was possessed by evil spirits.  The house has a less than savory history but then again, what house doesn’t?

Anyway, strange things start to happen as soon as the Lutzes move in.  Noxious black liquid floods the plumbing.  Crosses are turned upside down.  Their priest (Rod Steiger) gets violently ill when he attempts to bless the house.  George starts to act weird, getting angry at strange moments and walking around with an ax.  Kathy’s daughter from a previous marriage says that she’s made a new imaginary friend named Jodie and, apparently, Jodie doesn’t like George or her babysitter.  Flies swarm through the house and weird noises are heard in the middle of the night.  Kathy has nightmares.  George screams, “I’m coming apart!”  Even the family dog seems to be worried about the house, especially after a secret room is discovered in the basement.

Could the house be possessed!?  Is a terrible, other worldly evil trying to destroy the George and Kathy?  Will the Lutzes be able to escape and hopefully make a lot of money by selling their story?  Watch the film and find out.  And, if for some reason, you can’t watch this film, you can watch one of the dozen or sequels or maybe even the remake…

The original Amityville Horror was based on a book that claimed to tell the true story of the Lutzes.  For the record, it is generally agreed that Ronald DeFeo murdered his family in Amityville, New York and that George and Kathy Lutz later moved into the DeFeo house.  It’s also known that the Lutzes left the house after 30 days.  The Lutzes claimed that the house was possessed.  Others said that the Lutzes left because they couldn’t afford the house payments.  Regardless of why the Lutzes actually left, the book that claimed to tell their story was a best seller.

As for the film adaptation, The Amityville Horror is frequently described as being a classic of horror cinema.  However, I have to admit that, whenever I’ve tried to watch it, I’ve always ended up giggling after the first ten minutes or so.  Some of that is because the film is such a blatant rip-off of The Exorcist, right down to including a bratty child with a invisible friend and a troubled priest who struggles with his faith.  Just as The Exorcist featured Linda Blair throwing up on Max von Sydow and Jason Miller, The Amityville Horror seems to take a good deal of delight in tormenting Rod Steiger.  From the minute he first shows up, the house really has it out for him.  He gets swarmed by flies.  He gets physically ill.  His car stops working on him.  It’s like, seriously, just leave Rod Steiger alone!

(Interestingly, Don Stroud plays Steiger’s protegee and their relationship is largely reminiscent of the relationship between Father Merrin and Father Karras in The Exorcist.  Later, a police detective shows up and acts exactly like Lee J. Cobb’s Detective Kinderman.  Val Avery, who plays the detective, even bears a resemblance to Lee J. Cobb.  Considering just how successful The Exorcist was, it’s not surprising that the Amityville Horror would be influenced by it but, again, it’s still hard not to be a little bit amazed at just how blatant a rip-off Amityville really is.)

When the film isn’t tormenting Steiger, it’s concentrating on George going crazy.  Unfortunately, as played by James Brolin, George seems to be in a permanently cranky mood even before he and Kathy move into their new home.  Once the Lutzes movie into the house you find yourself wondering if George is possessed or if he’s just a jerk?  Sometimes, it’s hard to tell.  One thing is for sure: shortly after moving into the house, George becomes absolutely obsessed with chopping firewood and polishing his ax.  I know the sight of Brolin with that axe is supposed to be ominous and scary but I have to admit that I started to laugh every time he started chopping away.  Far more convincing was Margot Kidder in the role of Kathy but the film really didn’t give her much to do other than scream and worry about why her husband was always in such a sour mod.

Anyway, the most interesting thing about The Amityville Horror is that this rather slow and derivative film was such a box office success that it’s been followed by 18 (!) sequels and one remake.  Someday, when I’m feeling really, really brave, I’ll get around to reviewing those 18 sequels.  Until then, I leave you with George Lutz and his beloved ax.