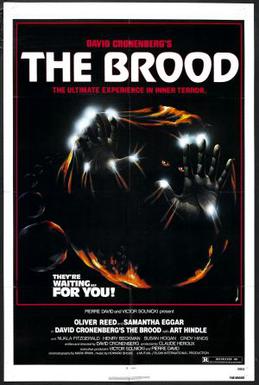 Canada!  It always seems like such a nice country until you watch a David Cronenberg film.  Hailing from Toronto, Cronenberg started his film career with two satirical, black-and-white science fiction shorts and then went on to become one of Canada’s best-known filmmakers.  At a time when most people associated Canada with politeness and maple syrup, Cronenberg made visceral and often-disturbing films, ones that often mixed sexuality with graphic body horror.  At a time when the genre was being dominated by Italian filmmakers, Cronenberg brought a uniquely Canadian sensibility to horror.

The Brood tells the story of one very doomed marriage.  Frank (Art Hindle) and Nola (Samantha Eggar) Carveth are fighting for custody of their five year-old daughter, Candice (Cindy Hinds).  (Not coincidentally, Cronenberg was going through his own custody battle when he first came up with the idea for The Brood.)  Nola, who has been emotionally scarred by both her alcoholic parents and her troubled marriage to Frank, is a patient at Somafree Institute.  Her psychotherapist, Dr. Hal Raglan (Oliver Reed), practices a technique called “psychoplasmics.”  Though it’s not easy to describe (and, wisely, Cronenberg doesn’t spend too much time trying to justify the science of it), it basically involves channeling anger and suppressed emotions into body modification.  What you or I might consider to be a hive or a welt is what Dr. Raglan would call a major breakthrough.

Frank is skeptical about Dr. Raglan’s theories but he still takes Candice to visit her mom.  However, when Candice returns from one visit bruised and scratched, Frank is convinced that Nola has been abusing her.  Hoping to both win custody of Candice and prove that Dr. Raglan’s methods are dangerous, Frank starts his own investigation into just what exactly has been happening at the Somafree Institute.

That’s when the children start to show up.  The children are small, with pale skin and light hair and oddly featureless faces.  They never smile.  They never speak.  They show up without any warning and violence always seems to follow them.  They attack both Nola’s mother and father.  When Nola suspects that Frank might be having an affair with Candice’s teacher, two of the children suddenly appear in her classroom.  Candice is scared of the children but still seems to have some sort of connection to them…

Even if you didn’t know this was a Cronenberg film, it would take just one look at the snow-covered landscape to identify The Brood as being a Canadian film.  As was often the case with Cronenberg’s early horror films, the imagery is frequently cold and chilly.  However, The Brood is not a cold film.  With its look at dysfunctional families and its emphasis on Frank’s attempts to protect his daughter, The Brood is actually one of Cronenberg’s most emotional films.  It’s a film about not only anger but also how people deal with that anger.  The killer kids are both literally and metaphorically children of rage.

Even by the standards of Cronenberg, things get grotesque.  Fortunately, the film’s talented cast keeps you interested, even when the bloody visuals might make you want to find a nice comedy to watch instead.  Art Hindle and Cindy Hinds are sympathetic as the father and daughter.  Oliver Reed keeps you guessing as to what exactly Dr. Raglan is actually trying to accomplish.  Nicholas Campbell and Robert A. Silverman, two members of the Cronenberg stock company, both make an impression in smallish roles.  And Samantha Eggar totally throws herself into her role, turning Nola into an absolutely terrifying monster.

Though it never quite reaches the flamboyant heights of either Scanners or Shivers, The Brood is still an effective horror film.  As opposed to some of his other films of the period, Cronenberg actually seems to not only care about the characters in the film but it also comfortable with encouraging us to care about them as well.  As a result, The Brood becomes about more than just trying to shock the audience.  The Brood is a film that sticks with you. 1 thought on “The Brood (reviewed by Lisa Marie Bowman)”