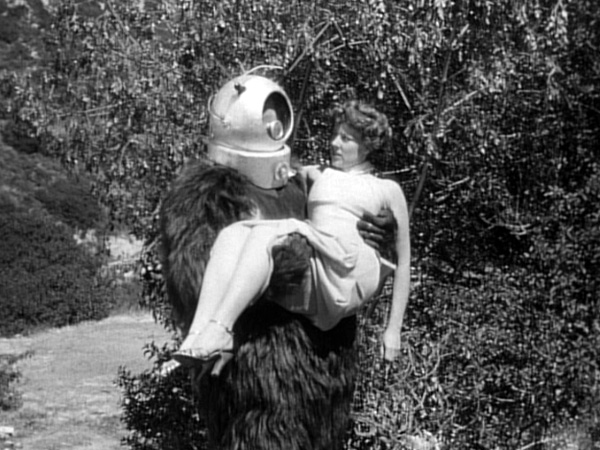 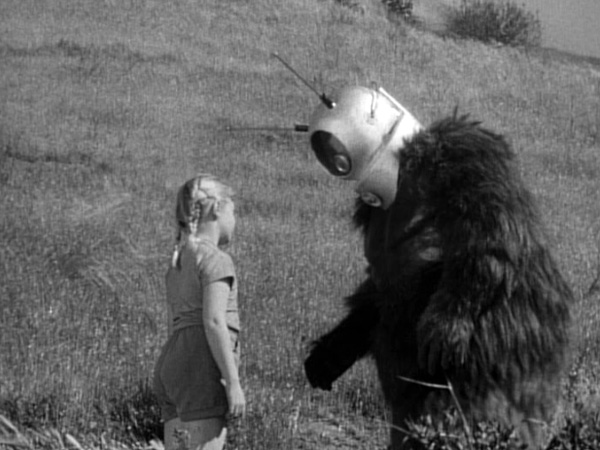 If you’re a fan of old horror and science fiction movies, you can probably imagine all sorts of different types of monsters destroying or, at the very least, conquering Earth.

There’s the big rubber lizards that lived over on Monster Island.  There’s the sinister humanoid aliens who have appeared in more movies than I can name.  There’s the big mass of jelly that starred in The Blob.  And then there were the aliens who brought Bela Lugosi and Tor Johnson back to life in Plan 9 From Outer Space.

But what about a big gorilla wearing a diving helmet?  Could he possibly conquer the world?

In the 1953’s Robot Monster, that’s exactly what happens.  Oh sure, we’re told that the alien is a “robot monster.”  He answers to the name “Ro Man” and apparently, he’s the latest in a long line of Ro Men.  He even has a boss that constantly bugs him and demands to know what type of progress he’s made in wiping out humanity.  That all sounds really fearsome and he may live in a cave with a random bubble machine but, still, he’s essentially a gorilla wearing a diving helmet. 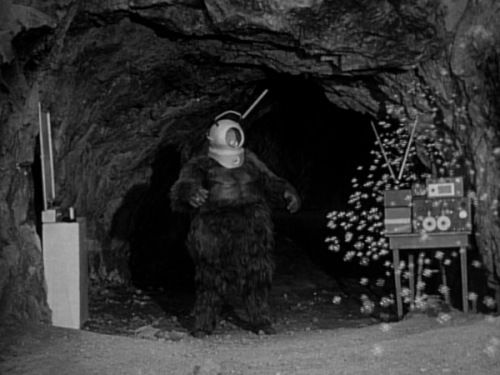 At the start of the film, Ro Man (George Barrows) uses a “Calcinator death ray” to conquer Earth.  It’s actually a pretty efficient little weapon.  One flash of light and suddenly, there are earthquakes, cities are in flames, and dinosaurs are fighting.  What are the dinosaurs doing there?  I’m not sure.  The movie doesn’t ever bother to explain nor does anyone in the movie seem to be surprised by their presence.  Maybe the dinosaurs actually didn’t go extinct and they instead spent centuries in hiding and waiting for a gorilla in a diving helmet to do away with all of those pesky humans.  If that was their plan, it turned out to be a surprisingly good one.

Anyway, it turns out that the Calcinator death ray may be powerful but it’s not fool proof.  A handful of humans survive and unfortunately, almost all of them are members of the same annoying family.  There’s The Professor (John Mylong) and his wife (Selena Royale).  There’s the Professor’s youngest children, Johnny (Gregory Moffett) and Carla (Pamela Paulson).  And then there’s the Professor’s oldest daughter, teenager Alice (Claudia Barrett).  Finally, Roy (George Nader) is the Professor’s assistant.  He’s in love with Alice but … so is Ro Man!

Ro Man may have come to Earth to conquer the planet but now he’s fallen in love.  Ro Man is left confused and troubled by his feelings and it doesn’t help that his boss keeps calling him and demanding to know why he has yet to kill the few remaining humans.  The thought of having to kill the human that he’s fallen in love with leads to this classic Ro Man monologue:  “I cannot – yet I must. How do you calculate that? At what point on the graph do “must” and “cannot” meet? Yet I must – but I cannot!”

(Now, as overwrought as that may read, just imagine what it sounds like when it’s being recited by a gorilla wearing a diving helmet!)

Anyway, you may be guessing that Robot Monster is a low budget movie and you would certainly be right!  Directed by Phil Tucker, Robot Monster had an estimated budget of $16,000.  It looks even cheaper and yet that cheapness is also what makes this movie just strange enough to be charming.  Watching it, you get the feeling that Tucker and his actors pretty much made it all up as they went along and it’s hard not to admire their determination to make a movie despite not having much in the way of resources or ability.  When you’ve only got $16,000 to make a movie and you’ve already spent the majority of it on dinosaur stock footage, it probably seems perfectly reasonable to hire an actor who already owns a gorilla costume (as Barrows did) and then put an old diving helmet on his head.  Robot Monster may not necessarily be a good movie but it certainly is a lot of fun!

And, ultimately, the film has found a certain success.  It’s become a cult classic, one that is appreciated world-wide by afficionados of bizarre movie making.  There will always be an audience for Robot Monster.