How do you make a monster?

According to this 1958 film, the man to ask is Pete Dumond!

As played by Robert H. Harris, Pete Dumond is the chief make-up artist at American International Pictures.  He’s so good that he can easily transform handsome teen idols like Tony Mantell (Gary Conway) and Larry Drake (Gary Clarke) into convincing monsters.  Everyone loves Pete but there’s a problem.  As the new studio head explains it, horror just isn’t that popular anymore.  Teenagers are no longer interested in seeing movies about werewolves and Frankenstein’s Monster.  Instead, teens now only care about rock and roll.  Elvis has killed horror!

(Actually, the film argues that a recording artist named John Ashley killed horror.  At the time this movie was made, John Ashley was under contract to American International Pictures and the film even includes a dance number where Ashley performs his latest hit.  Ashley wasn’t a bad singer but it’s still hard to believe that he could have killed horror.  That said, the choreography is fun and every horror movie needs at least one random dance number.)

Sadly, Pete is about to be out of a job.  However, what the studio heads don’t realize is that Pete is more than just a makeup artist!  He’s also a master hypnotist!  Soon, Pete is using a special foundation cream to hypnotize Tony and Larry.  Once he has them under his control, he sends them, in full costume, on a mission to kill anyone who thinks that horror is dead! 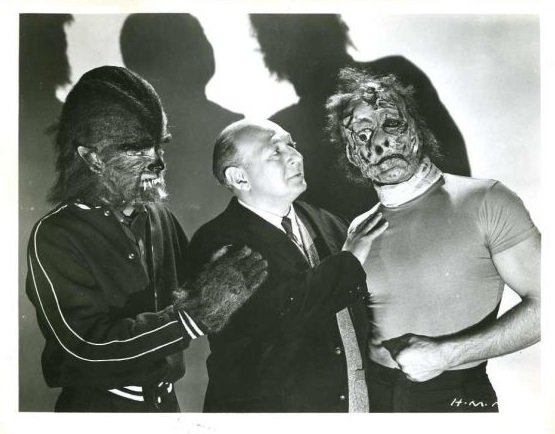 There’s a lot of enjoyment to be found in How To Make A Monster.  The film not only takes place at American International Pictures but it was produced by AIP as well, so the entire movie is basically full of in-jokes that would only be appreciated by B-movie fans.  For instance, the makeup effects that Pete creates are the same ones that were used in I Was A Teenage Frankenstein and I Was A Teenage Werewolf.  (Gary Conway wore the Frankenstein makeup in both Teenage Frankenstein and this film.)  Towards the end of the film, when Larry and Tony confront Pete at his home, the walls are decorated with all of the monsters that Pete has created throughout the years and attentive viewers will recognize them as coming from such previous AIP films as The She-Creature, It Conquered The World, and Invasion of the Star Creatures.  (Seriously, I loved seeing the big crab monster from It Conquered The World hanging on Pete’s wall.  I’m sure horror and sci-fans in the 1950s felt the same way.)  While the majority of the film is in black-and-white, the scenes in Pete’s home are in full and vibrant color, as if AIP was announcing, “This is what makes the movies fun!” 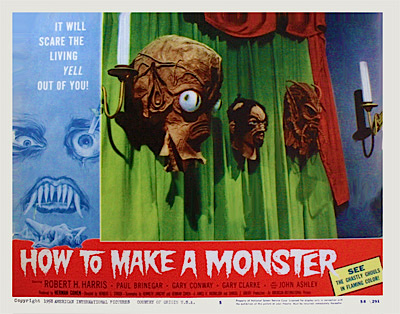 Needless to say, How To Make A Monster is not a film that was ever meant to be taken seriously.  Instead, it’s a rather cheerful send-up of both the film business and AIP’s own status as a B-studio.  (At times, I felt like the film could just as easily have been called Sam Arkoff’s The Player.)  Watching the film, one gets the feeling that it was largely made as a lark, an inside joke amongst friends.  As such, it’s impossible to dislike this energetic little film.  Director Herbert L. Strock keep the action moving along and, in the lead role, Robert H. Harris gives exactly the type of over-the-top performance that this material needs.

If you’re a fan of 50s drive-in movies, How To Make A Monster is a film that you simply must see!