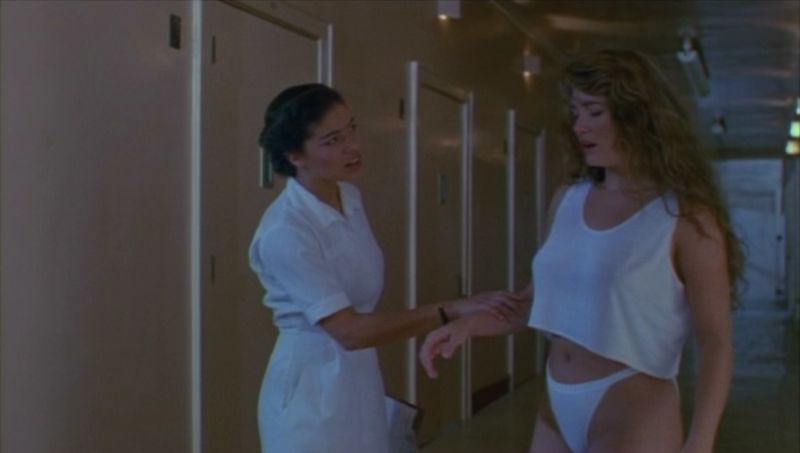 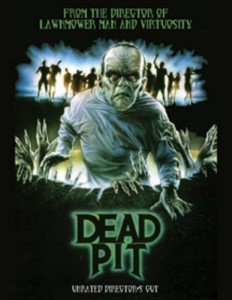 Let me set the scene for you:

It’s late at night. A woman wakes up from a terrible nightmare and finds herself in a shadowy, white-walled hospital room. She gets out of bed and walks over to the window. Standing outside, staring up at her, is a lone figure in blood-stained surgical scrubs. The figure’s eyes glow red as he says, “Around here, I’m the head surgeon.”

And then he tosses some poor orderly’s decapitated head up at the window.

If you enjoy the type of silly but effective creepiness that is epitomized by this scene, then 1989′s The Dead Pit might just be the film for you.

In The Dead Pit, Cheryl Lawson plays Jane Doe.  As you might guess from her name, Jane isn’t quite sure who she really is or how she came to lose her memory.  All she knows for sure is that she’s been checked into a disturbingly sterile hospital.  At night, she’s haunted by nightmares in which she’s stalked by a menacing figure wearing a doctor’s mask and during the day, she has to deal with the occasional earthquake and the fact that she occasionally starts to speak in a vaguely possessed voice that freaks out the head psychiatrist (Jeremy Slate).  Could it have anything to do with the fact that one of her fellow patients is an ex-nun who is obsessed with sprinkling holy water over everything?  Or could it possibly be related to the fact that many years ago, her psychiatrist murdered Dr. Ramzi (Danny Gochnauer) when he discovered that Ramzi was actually a serial killer who murdered countless patients?  Then again, it could just be related to the fact that there’s apparently a hundred freaking zombies just wandering around the hospital…

If The Dead Pit sounds like it’s kinda silly and a little bit campy … well, it is.  However, it’s also a lot of fun, the type of unapologetically trashy horror film that makes for perfect Halloween viewing.  Director Brett Leonard makes good use of what appears to be a very small budget.  The film was apparently shot on the grounds of an actual mental hospital and, through the use of inventive lighting and a constantly tracking camera, Leonard makes good use of the locale’s inherent creepiness.  This is yet another film that works far better than you might expect, simply because the director understood just how scary isolation can be.

Just from doing a quick google search, I can also say that apparently, this film — and, specifically, Cheryl Lawson’s lead performance in this film – has a lot of fans on the Internet.  I can understand that because Lawson’s likable, she’s believable whether she’s scared and possessed, and she screams with panache.  She makes this film effective because she takes the material seriously and has enough respect for the audience to actually give a good performance and that makes it impossible not to 1) identify with her and 2) hope that she makes it through the film in one piece.  Even when Lawson is having to scream for her life, she never allows Jane Doe to come across as weak.   Speaking as a girl who loves horror films but hates to always see women having to act like simple-minded victims, I found Lawson’s performance to be almost empowering and I’m sure that’s why so many of The Dead Pit’s fans love this movie.

Of course, Cheryl Lawson also spends almost the entire movie running around in her panties and a t-shirt.  I guess that also could possibly have something to do with the film’s popularity…

Okay, I guess that is a more likely explanation.  However, in all honesty, if I was in a horror movie, I would totally want to be the girl who spends the whole movie running around in her underwear.  I mean, yes, I know that it’s the good girls who always survive until the end but seriously who wants to be a good girl in a horror movie?  The good girls are boring and usually end up forgotten by the time the sequel comes out.  The bad girls are the ones that everyone remembers.

But, regardless of the main reason why you personally might enjoy it, the Dead Pit is a fun movie that’s a great pick if you’re like me and you often find yourself simply looking for something to watch at 2 in the morning. 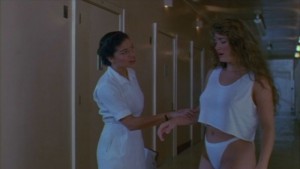 1 thought on “The Dead Pit (Reviewed by Lisa Marie Bowman)”