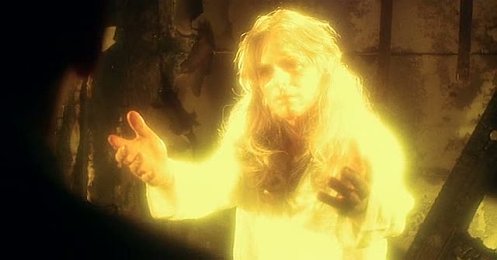 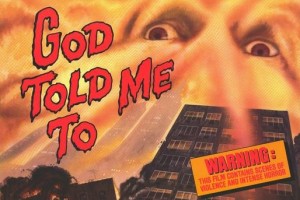 With Halloween rapidly approaching, this seems like the perfect time to tell you about one of my favorite obscure horror films.  This film was first released in 1976.  At the time of that initial theatrical run, the film was called God Told Me To Kill.  That title proved to be rather controversial and the film was promptly pulled from circulation and then re-released under the new title of Demon.  However, since Demon was such a painfully generic title, the name change didn’t do much to help the movie at the box office and, again, it was yanked from circulation and the title was changed for a third time.  Under the name God Told Me To, the film was once again re-released.

Not surprisingly, given this chaotic release history, God Told Me To never quite got the attention that it deserved.  Over the years, the film has developed a cult following among those (like me) who have discovered the film on DVD.  But God Told Me To still remains something of an unknown film.

In God Told Me To, Tony LoBianco gives an excellent performance as Peter Nicholas, a tough New York police detective and devout Catholic.  As the film starts, Nicolas is burned out on his job. He’s separated from his mentally unstable wife (played by Sandy Dennis) but can’t divorce her and marry his girlfriend (Deborah Raffin) because it would go against his religious beliefs.

Nicholas finds himself investigating a serious of seemingly random murders that all have one thing in common.  When captured, each murderer confesses his crimes by explaining, “God told me to.”  As Nicholas investigates, he discovers that every murderer can be linked with a mysterious figure named Bernard Phillips (played the late, great Richard Lynch).

Nicholas’ investigation leads him to discover that Phillips was the product of a virgin birth, causing Nicholas to both question his own religious faith and to have to confront the possibility that Phillips could very well be a God…

And that’s about all I can tell you without running the risk of totally spoiling the film.  Let’s just say that God Told Me To is one of those films where nothing is quite as it seems.  It’s a film that keeps you off balance and which, unlike a lot of horror films, features a twist that’s both plausible and unexpected.

God Told Me To was directed by Larry Cohen, an exploitation veteran who has been responsible for some of the most thought-provoking B-movies in cinematic history.  Like many of Cohen’s films, God Told Me To is something of a mess but it’s a fascinating mess.  Both Peter Nicholas and Bernard Phillips prove to be fascinating characters and, during the film’s final third, Cohen takes both of them in unexpected directions.

God Told Me To is one of those films that every fan of horror and cult cinema should see at least once.  If you haven’t seen it, this Halloween is the perfect time for you to discover it for yourself. 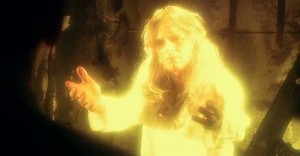